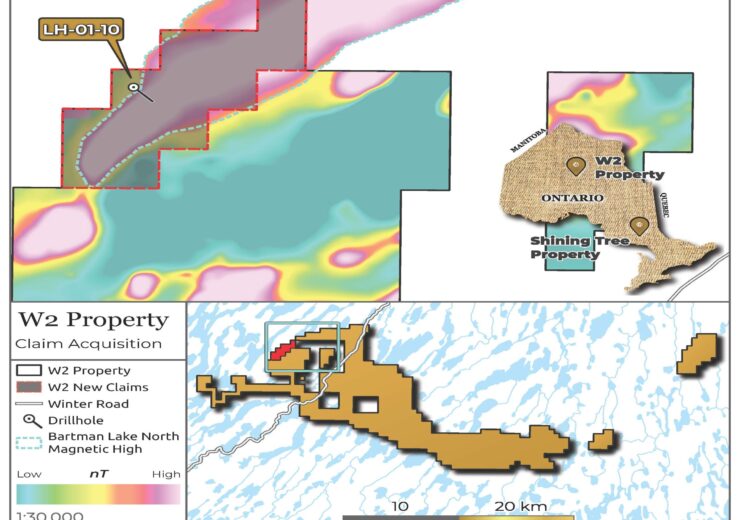 Platinex Inc. (CSE: PTX) (Frankfurt 9PX) (“Platinex” or the “Company”) is pleased to announce that its wholly-owned subsidiary, Endurance Elements Inc. (“Endurance Elements”), has acquired additional mining claims adjacent to the W2 Copper-Nickel-PGE Project (the “W2 Project” or “W2”) in the Ring of Fire in Ontario, Canada. The new claims combined with the existing claims cover an 8-10 km long, northeast-trending magnetic high (the “Bartman Lake North Magnetic High” or “BNMH”) and include the area of a Titanium-Vanadium (Ti-V) discovery made by Aurora Platinum Corporation in 2001.

These results were obtained from 19 core samples analyzed by the ICP partial acid-digestion method. When 8 randomly selected samples from all three intercepts were re-analyzed by the near-total digestion method to determine the true oxide values of these elements, all samples yielded significantly higher values (up to 8.2% TiO2 and 0.81% V2O5) than those determined earlier. These values are comparable to vanadium deposits mined at average grades ranging from 0.47% to 1.4% V2O5 in the Bushveld Complex (South Africa) and at the Windimurra Mine (Australia).

Importantly, while the lack of critical infrastructure in the Ring of Fire area currently represents a hurdle to the viability of such a Ti-V deposit, the region stands to be substantially improved as other projects in the area enter the development phase and the necessary infrastructure is built. In particular, the recent takeover of Noront Resources Ltd. by Wyloo Metals Pty Ltd. and recent announcements made by the Ontario/Federal governments are all positive developments for the area deposits and Company.

Platinex’s CEO, Greg Ferron, commented, “The Company’s near-term exploration plans at W2 will remain focused on expanding existing near-surface Copper-Nickel and Platinum-Palladium zones and testing several high-priority magnetic-high coincident EM conductors in the eastern section of W2, however, the Titanium-Vanadium deposit is a strategic asset that may prove to be of significant interest in the medium term.”

Platinex has issued 200,000 shares (the “Share Issuance”) as consideration for the acquisition and granted the seller a 2% net smelter return (NSR) royalty. The Company has the right at any time to repurchase 50% of the NSR royalty for $1,000,000. The Share Issuance is subject to a statutory 4-month hold period.

The W2 Project is a district-scale land package comprising 784 mining claims (823 cells) and covering over 16,000 hectares (160 km2) at the southern extent of Ontario’s Ring of Fire. W2 controls one of the major Oxford Stull Dome complexes including the layered mafic-ultramafic Lansdowne House Igneous Complex (“LHIC”) which is highly prospective for copper-nickel (Cu-Ni) and platinum group element (PGE) deposits. The common thread of strong Cu-Ni-PGE, Cr and Ti-V mineralization in the mafic-ultramafic intrusions ringing the Oxford Stull Dome is suggestive of a common source, a very large magmatic system, and therefore a potential significant abundance of metals in each intrusion. At W2, widespread Cu-Ni-PGE mineralization has been delineated in at least seven significant mineralized zones within a 7.5 km long folded corridor near the centre of the land package. Additionally, VTEM and AeroTEM II airborne geophysical surveys have identified multiple high-priority conductors in the eastern section of the property which have yet to be drill tested.

Platinex is also pleased to report that it has been approved for a grant through the Ontario Junior Exploration Program. The grant is for a maximum of $80,000 and will be provided as a 50% rebate on expenditures related to prospecting, geochemical surveying, and reporting at the Company’s Shining Tree Project in Timmins during the summer of 2022 field season.

The Company will announce its Shining Tree gold exploration program in due course with funds from the OJEP grant being used for geological mapping and additional geochemical work, including a soil sampling program to follow up on the IP and gold-in-till work carried out in 2021. The results of these programs along with existing geophysical data (magnetic and IP) will be integrated to generate drill targets.

The technical information presented in this news release has been reviewed and approved by Ike Osmani, P. Geo, a consulting geologist of the Company, and James R. Trusler, P.Eng., Chairman of Platinex Inc., and both are considered a qualified person for exploration at the W2 project, as defined by National Instrument 43-101, Standards for Disclosure for Mineral Projects.

About Platinex Inc.: Platinex creates shareholder value through the opportunistic acquisition and advancement of high-quality projects in prolific Ontario mining camps. Current assets include a 100% ownership interest in the district-scale W2 Copper-Nickel-PGE Project and a 100% interest in the 225 km2 Shining Tree Gold Project in the Abitibi region of Ontario, a world-renowned gold district. The W2 Project controls one of the major Oxford Stull Dome complexes. The Shining Tree Project covers a major portion of the Ridout-Tyrrell deformation zone that trends as far west as Newmont’s Borden Mine, through the area of IAMGOLD’s Cote Gold deposit, and across Aris Gold’s Juby Project. The Company is also developing a net smelter return (NSR) royalty portfolio and currently holds royalties on gold, PGE, and base metal properties in Ontario.

Russia’s Afromet pulls out from Darwendale platinum project in Zimbabwe