Karachi power plant unit 2 and 3 are expected to start commercial operations in 2021 and 2022, respectively. 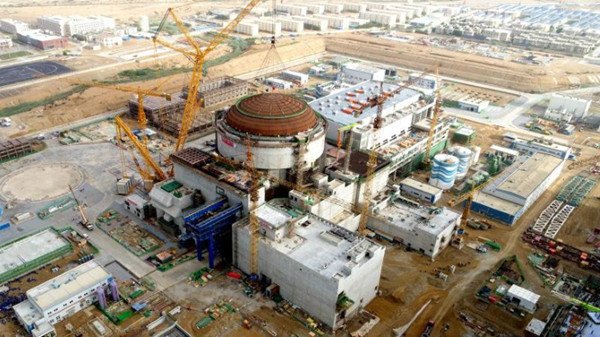 Image The outer dome in place at Karachi 2 Photo: Courtesy of CNNC.

China National Nuclear Corporation (CNNC) announced that the outer safety dome has been installed on the containment building of unit 2 at the Karachi nuclear power plant in Pakistan.

The installation of dome marks the end of the general construction work on Karachi Unit 2, and is expected to be followed up by containment and heat tests.

The steel dome weighing around 366tonnes, measures approximately 53m in diameter and more than 23m in height was placed upon the top of the containment building walls.

The unit is the first of two Chinese-supplied Hualong One reactors being built at the site.

The Hualong One reactor uses a double-layer safety shell design, which includes the inner protective dome, and the outer dome to protect the reactor and prevent the release of radioactive materials into the environment in the event of a serious accident.

CNNP said: “The successful hoisting of the outer safety dome has marked the end of the main structural project of the nuclear power plant, which has created favourable conditions for the overall test and thermal test of the subsequent containment.”

Units 2 and 3 of Karachi power plant are the first export of China’s Hualong One design, where the construction of unit 2 was started in 2015 and unit 3 in 2016.

Installation of the reactor internals at unit 2 was completed in January this year. The units are scheduled for commercial operation in 2021 and 2022, respectively.

China National Nuclear Corporation claims that apart from the two units under construction in Pakistan, it has built four Hualong One units in China.

Two Hualong One units are being constructed at its Fuqing plant in Fujian province, while China General Nuclear (CGN) is building two at its Fangchenggang site in Guangxi province. All four units are expected to start commercial operations in 2019-2020.