Power supply in Singapore – where does nuclear stand?

Like Hong Kong, Singapore is a highly-urbanized southeast Asian island metropolis. But for historical and geopolitical reasons, its attitude to nuclear power is very different to that of its northern neighbour. 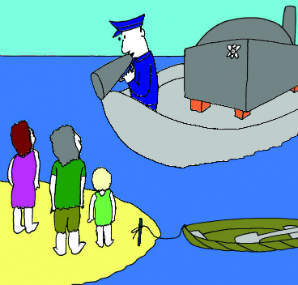 Like Hong Kong, Singapore is a highly-urbanized southeast Asian island metropolis. But for historical and geopolitical reasons, its attitude to nuclear power is very different to that of its northern neighbour.

We saw in last month’s comment that Hong Kong is set to depend on nuclear power from mainland China for 50% of its power generation by 2020. Singapore is another major Asian conurbation that is growing rapidly and therefore needs large quantities of secure electricity supplied at affordable prices, but supplied in an environmentally-friendly way, given the risks of air pollution. So nuclear power ought to be able to offer a good solution along the lines of Hong Kong’s arrangements — if not generated in-territory, perhaps it could be imported from reactors in nearby countries. In reality, however, this seems a long way from happening.

Cartoon: The Unit, by Alexey Kovynev

"Hey, guys! Think about it! You won’t find a nuclear power plant for a better price!"

Singapore is actually even more densely-populated than Hong Kong, even without the high-rise apartment and office blocks that cling to the edge of Hong Kong’s Victoria Harbour. Its population is also lower (5.3 million as opposed to Hong Kong’s 7.2 million). But with an area of only 700 square kilometres, the island city-state’s human density is only surpassed by Macau and Monaco amongst sovereign states (which are both geographically much smaller). Given its location on the equator, a huge amount of power generation capacity is required (particularly for air conditioning) but Singapore also has a booming industrial sector, combined with high commercial office and residential demand. Its has a current installed power generation capacity of about 10 GWe and annual consumption of 46 TWh (in 2011). Of this, 78% is supplied by imported natural gas piped from Malaysia and Indonesia, and most of the remainder comes from oil. In return, there are some minor exports of electricity to Malaysia. A liquefied natural gas (LNG) terminal is to be completed in Singapore this year, which will increase the share of gas in power generation. While renewable sources such as solar can potentially augment Singapore’s energy supply, large-scale deployment to generate baseload electricity reliably and competitively remains a challenge, due to intermittency and space constraints. Singapore is not a windy place, so the potential for wind power is basically zero, even without the obvious space limitations.

With an almost total dependence on energy imports, and given the obvious limitations of renewables, the Singapore government has become concerned that energy might become a barrier to its economic competitiveness. Its overall energy policy framework has thus aimed to maintain a balance between the usual three policy objectives: energy security, environmental sustainability and economic competitiveness. With these goals in mind, the government embarked on a pre-feasibility study on nuclear energy in 2010 in response to a recommendation by its Economic Strategies Committee. The study was part of efforts to continually explore all options that could help overcome the obvious local energy constraints and enhance energy security.

The study concluded in October 2012 that nuclear energy technologies presently available are not yet suitable for deployment in Singapore. The study stated that although the latest designs of nuclear power plants are much safer than older designs which remain in use in many countries, their risks to Singapore, a small and densely-populated urbanised island, still outweigh their benefits at this point. It continued that since the Singaporean government is planning for the very long term and not only for immediate energy needs, it prefers to wait for technology and safety to improve further before reconsidering its options. Finally, it said, "Over time, nuclear power plants with safer and more robust designs will be developed and so Singapore needs to continue to monitor the progress of nuclear energy technologies to keep our options open for the future." With many other countries building nuclear power plants, Singapore will certainly still support research in nuclear science and engineering and the training of engineers and experts, and has appropriate institutions to further this.

?There have been clashes in the past over the delivery of fresh water to Singapore; relying on another sovereign state for a significant proportion of electricity supply is rather unlikely.

It is clear that the 2011 Fukushima accident, which occurred during the study period, must have had some impact on its conclusions. It seems that the main factor for the government’s decision was the need to ensure the safety of the population. The report noted that there no global standards that restrict populations around nuclear power plants, and some towns in the United States, Canada and Switzerland are within 5 km of one. But the issue of emergency evacuation is clearly substantial. There are only two bridges available to the mainland should a sudden evacuation be required. Such considerations have been important in the past: the Shoreham nuclear station was completed on Long Island near New York in the mid-1980s, but was never permitted to operate due to emergency evacuation considerations. Public opinion urging a cautious approach to the introduction of nuclear energy has been on the rise following Fukushima. Nevertheless, the nature of democracy in Singapore would certainly not prevent a determined government instituting a nuclear power programme, if it believed it was essential.

The study did not focus only on big costly reactors, and also included small modular reactors (SMRs) and reactors of various technologies, such as gas- and liquid metal-cooled reactors, which are still under development. It was noted that the performance claims of many new designs cannot be verified yet and not all are likely to be commercialised successfully, so it would be premature for Singapore to make decisions on such technologies at this time. One option which has been suggested for Singapore is siting reactors either underground (as is proposed for some of the SMRs) or on barges located off the coastline. But until these have been commercialised elsewhere, they are unlikely to be taken up in Singapore as serious options, with safety considerations still very much foremost.

New nuclear countries aspiring to a nuclear power programme undoubtedly see a civil nuclear programme as a spur to local economic development. The other benefits of nuclear power that are usually cited are energy security, environmental and (potentially) economic advantages. However, localisation of plant component production, the enhancement of human capital and possible spin-offs from engagement in a high-technology infrastructure project are also attractive to many developing nations. These benefits, however, do not apply very much to Singapore, which has grown rapidly since independence from the UK in 1965 to become a highly-developed economy with a very well-educated workforce and consequent high level of income per capita. So the argument in favour of nuclear in a country such as South Africa (which already has two reactors) or in emerging nuclear countries such as Turkey and Malaysia carries much less weight.

The other advantage of relative affluence in Singapore is that it doesn’t have to worry so much about the financial implications of heavy dependence on gas. Although power demand is likely to rise by 2-3% per annum in the period to 2030, so increasing by perhaps 50% over this period, unless the price of gas spirals upwards, the affordability of gas-based electricity generation in Singapore would not be constrained. If shale gas turns out to be as big a game-changer in the world energy market as some people believe, cheaper gas (even if delivered as LNG instead of by pipeline) may be the rule. Although it would be very nice to have cheaper power from nuclear, renewables or any other technology, cost will not be the number-one criterion. From the environmental standpoint, generating most of the power from gas is hardly ideal, but stringent curbs on motor vehicle use and on other sources of pollution keep the air quality in Singapore at acceptable levels.

The other option is to import electricity from nuclear stations in either Malaysia or Indonesia. This cannot be ruled out over the longer term, but there are a number of important issues to consider. First, despite rising cooperation in the Association of Southeast Asian Nations (ASEAN) area, any new nuclear power programmes that do take off will be developed very much based on domestic need, and would be unlikely to be predicated on power exports. Although gas pipelines and power grids will no doubt be developed rapidly over the next twenty years to 2030, there are political differences between these countries, notably between Singapore and Malaysia. There have been clashes in the past over the delivery of fresh water to Singapore; relying on another sovereign state for a significant proportion of electricity supply is rather unlikely. Shared power grids will be established to balance out supply and demand fluctuations, rather than to spur a huge new investment programme in one particular country.

This makes the Singaporean situation rather different to that of Hong Kong. Although Daya Bay 1 and 2 were developed in Guangdong Province at a time of some political uncertainty in Hong Kong, with anticipation of the negotiated return of the territory to China, there was never a substantial risk that political conflict would constrain the operations of the plant. There was clear benefit to both sides by cooperating closely together, and the establishment of the joint venture structure acted as a model for many future projects. Malaysia, Indonesia and Singapore must move a lot closer politically under the ASEAN umbrella before the concept of joint nuclear power stations can proceed, but it need not be ruled out forever. There will be power imports and exports, but these are unlikely to represent more than a few percentage points of annual requirements.

Hong Kong is therefore arguably a special case. The development of nuclear power in Singapore in the period to 2030 must depend on satisfying concerns about locating reactors in densely-populated places. Large light water reactors (LWRs) are unlikely to fit the bill for Singapore but will remain very appropriate for other locations. SMRs are the obvious solution for Singapore, with the caveats that they can be located with a high degree of safety in urban areas, and that the island state needs huge quantities of power, not just a few hundred megawatts. Singapore is not likely to act as an SMR guinea pig, but it will be closely watching experience elsewhere.

Steve Kidd is an independent nuclear consultant and economist, with 17 years of work in senior positions at the World Nuclear Association and its predecessor organisation, the Uranium Institute.