Sellafield has announced how it plans to take down the 61m-high chimney on top of the 61m-high First-Generation Reprocessing Plant, Since its construction was found not to meet current building code, its removal has been given a high priority. 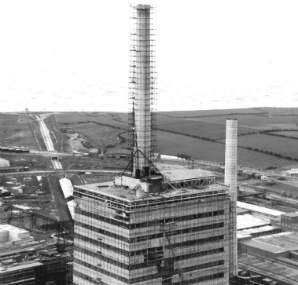 Sellafield has announced how it plans to take down the 61m-high chimney on top of the 61m-high First-Generation Reprocessing Plant, whose construction has been found not to meet current building code. Removing it has been given a high priority.

The building’s position in the middle of the site rules out the use of explosives for demolition. Instead, a self-climbing platform installed at the base of the chimney will inch its way to the top in 1m steps. The platform grips the chimney with multiple compression bands, which are loosened and tightened in a sequence that allows it to climb and descend. Once near the top, diamond-wire band saws will cut through the 250mm-thick concrete wind shield into about 15 metre-square, 600kg blocks, which are manoeuvred into a construction hoist and lowered to the roof. Then the interior 2.8m-diameter, 3mm-thick stainless steel liner will be cut with a plasma torch.

To protect the active cells in the building below, some of which have not been decontaminated, no debris is allowed to drop down the chimney or in the gap between concrete wind shield and the metal flue. An internal floor hangs inside the flue for working and to prevent materials falling inside, and a second donut-like barrier fills the exterior void.

Platform workers will need to wear respirators and wear plastic cover suits because the interior surface of the flue has some contamination, although the exterior concrete is not contaminated at all. For protection, pieces of the flue, which weigh 25-30kg, are wrapped in plastic on the platform before being lowered to roof level in the construction hoist.

An overbridge will be built on top of the Reprocessing Plant roof to support personnel and materials to be transferred from the stack area to the edge of the roof, where a second hoist will carry them to ground level.

The job, to remove 600 tonnes of concrete and rebar, and more than 25 tonnes of stainless steel, is expected to take 18 months once it begins in February 2017. In the meantime, the replacement Separation Area Ventilation stack (built at ground level) continues to be built.

A 7m-high mock-up stack is being built to test and commission the working platform. Construction of the mock-up is expected to start in September, with trials completed in February 2015.

Sellafield’s main subcontractor for the job is Nuvia, with Delta Steeplejacks carrying out the climbing platform tasks.

The First Generation Reprocessing Plant was constructed in the early 1950s and carried out the first stage of reprocessing fuel from the Windscale Pile Reactors to produce materials for the UK’s defence programme. It was later modified as a head end plant for commercial oxide fuels following the opening of the Magnox Reprocessing Plant, which itself has recently celebrated 50 years of operation. Operations ceased in 1974 and oxide reprocessing was transferred to the Thorp reprocessing plant which became operational in 1994.

Close-up of the platform, which has three working levels: at top flue cutting, in the middle concrete cutting, and at bottom self-climbing machinery