RUSSIAN POLITICAL CIRCLES have become worried about rumours concerning the possible re-nationalisation of the Sayano-Shushenskaya hydroelectric power station. This could happen if the move is approved by the Supreme Court of Arbitration, which will finish examining the case in the near future. 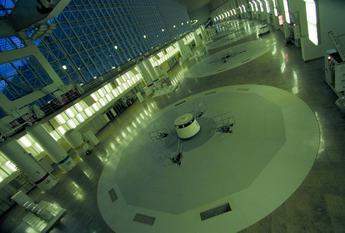 The conflict involves the administration of western Siberia’s Khakasia republic, where the station is located, and the RAO Unified Energy Systems (UES) holding. RAO UES is a natural monopoly, with the state owning 52% of its shares. The holding owns 78.9% of the station’s stock.

The Sayano-Shushenskaya station was privatised in 1993 in line with a decree issued by then President Yeltsin. At that time, the republic’s authorities renounced their stake, but obtained the right to purchase cheap electricity for ten years. This agreement will expire in September 2004, as will the limitations period covering all privatisation deals.

Khakasia governor Alexei Lebed took his case to court a year ago, demanding that the privatisation deal be declared illegal. Khakasia lost two courtroom battles, but then the court of appeal ruled in its favour. Consequently, acting deputy prime minister Alexander Zhukov ordered the hydroelectric station’s re-nationalisation to be started in line with the ruling.

The saga began to take on scandalous proportions and to cause public concern. Many people interpreted Zhukov’s instruction as the government agreeing to re-nationalise the station.

The Russian business community has so far remained calm, despite the immediate fall in RAO UES shares. Business circles do not believe the station will be re-nationalised because this would tarnish Russia’s reputation in the eyes of the west, while it would also frighten off investors and torpedo power industry reform. Moreover, it would give the green light to the mass revision of privatisation results.

On the other hand, some experts believe that Khakasia’s position is quite shaky because the preservation of privileges runs counter to government policy. Should the court force the state to re-nationalise the station, then the state’s stake in RAO UES would drop well below 51%, which would violate federal legislation. There is also no guarantee that the Khakasia republic’s administration will be entitled to any RAO UES stock.

Some senior government officials have let it be understood that the cabinet does not support Khakasia’s demands over the re-nationalisation of the Sayano-Shushenskaya station and that it will help RAO UES defend its rights.

Acting economic development and trade minister German Gref said re-nationalisation would set a precedent for the re-division of the power sector’s property. The execution of the previous court ruling was stopped after RAO UES filed a complaint with the Supreme Court of Arbitration.

In addition, the conflict has another aspect. The Sayany aluminium factory, which belongs to the well-known oligarch Oleg Deripaska, consumes the bulk of all electricity generated by the Sayano-Shushenskaya station. Deripaska’s Basic Element company does well out of the privileged energy tariffs deal, but it would also gain from the transfer of the station’s stock to the republic’s administration. As the republic’s largest taxpayer, Basic Element contributes a substantial part of all Khakasia’s budgetary proceeds. So Deripaska has every chance of taking control of the power station, if its federal stock is sold off. Indeed, it is no secret that the oligarch wants to acquire the station’s shares one way or another.

Meanwhile, RAO UES has added another twist to the saga by re-registering a hydroelectric power station in the neighbouring Krasnoyarsk territory, which shareholders believe offers a more favourable business climate. RAO UES shareholders examined this issue at a meeting on 21 May.

The Sayano-Shushenskaya hydroelectric station’s future will be decided within the next two months. However, even today there is every reason to believe that the station will not be re-nationalised, because this runs counter to every objective economic process in Russia and, in particular, the cabinet’s plans to restructure the natural monopolies.