This month is the 30th anniversary of the IAEA’s best-known peer review service the Agency offers its member states: the Operational Safety Review Team (OSART). 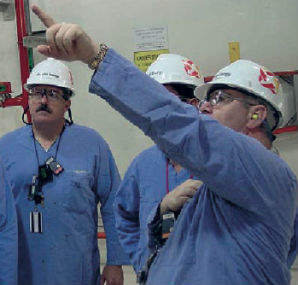 This month is the 30th anniversary of the IAEA’s best-known peer review service the Agency offers its member states: the Operational Safety Review Team (OSART).

In 1983, the Agency conducted its first OSART mission to the Kori Nuclear Power Plant in the Republic of Korea, and it conducted a total of 174 OSART missions over the following 30 years. The reviews have been done in 34 nations at 103 nuclear sites, the IAEA said in a statement.

Performed at the request of IAEA Member States, OSART services aim to improve operational safety at nuclear facilities by objectively assessing safety performance using IAEA Safety Standards and providing recommendations and suggestions for safety improvement. On a more general level, the missions serve as a way to exchange information and experience, provide Member States with good practices and provide plants with informal advice.

"OSART missions are one of the most important ways in which we help to ensure better and wider implementation of the IAEA Safety Standards," IAEA Director General Yukiya Amano told an OSART anniversary seminar in Vienna. "As you know, under the IAEA Action Plan on Nuclear Safety, countries with nuclear power plants committed themselves to voluntarily host at least one OSART mission during the coming three years."

OSART teams normally consist of about a dozen specialists, usually two-thirds of whom are senior officials from Member State nuclear sites or organizations, with the rest coming from the IAEA itself. The cumulative nuclear-related experience of a typical team often exceeds 300 years.

OSART missions involve a substantial amount of work both at the reviewed facility and within the Agency. Each review begins with a preparatory meeting with plant management and other related organizations about one year before the IAEA team arrives on site.

The main portion of the review usually lasts about three weeks, after which a preliminary report is delivered to the host facility, followed by a final report three months later. These reports are automatically derestricted and available for public view unless the host country requests otherwise. Lastly, a three-to-five member team conducts a follow-up visit about 18 months after the review to evaluate progress made.

Today, 13 OSART missions, including follow-up missions, are in the planning stage.
Source: IAEA