Power company Fortum Oyj has decided to participate Finland's Hanhikivi NPP, which is to be built in Pyhäjoki, western Finland, by Russian state nuclear corporation Rosatom. The Ministry of Employment and the Economy confirmed that the project now meets the ownership conditions set by the Finnish government and the parliament. 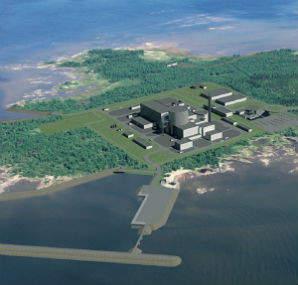 Power company Fortum Oyj has decided to participate Finland’s Hanhikivi NPP, which is to be built in Pyhäjoki, western Finland, by Russian state nuclear corporation Rosatom. The Ministry of Employment and the Economy confirmed that the project now meets the ownership conditions set by the Finnish government and the parliament.

Fortum will have a 6.6% share in project company Fennovoima Oy through the Voimaosakeyhtiö SF (VSF) cooperative, and will participate in the project "on the same terms and conditions as the other Finnish companies." Fennovoima, which is implementing the Hanhikivi project, is 66% owned by VSF and 34% owned by RAOS Voima Oy, an affiliate of Russia’s Rusatom Overseas.

The Finnish government had originally set 30 June as the deadline for domestic ownership in the project to achieve the required 60%, but said it would consider any new developments before its final decision set for 6 August. In addition to Fortum, Finnish construction company SRV said it would take a 1.8% stake in the project and steelmaker Outokumpu said it would boost its ownership stake by 1.8% to 14.1%. Fennovoima said in a statement: "Taking into account the latest financial commitments, domestic ownership of Fennovoima now stands at 65.1%.

Fortum had earlier stipulated that its participation would depend on restructuring its ownership of TGC-1, a power company based in St Petersburg and co-owned by Fortum and Russian gas company Gazprom. However, as yet no agreement has been reached on the water-power contract, and Fortum has apparently retreated from its earlier demand."Fennovoima is an important venture for Finnish society," said Fortum’s interim CEO, Timo Karttinen. "Through our participation, the Fennovoima venture can benefit from Fortum’s multi-faceted know-how and technical skills in the nuclear power sector. At the same time Fortum can continue its good, long-running partnership with Rosatom and further develop its own know-how," he noted.

SRV intends to take on a project management role jointly with Russia’s Titan 2, which is the principal construction contractor. SRV has signed an agreement with Titan 2 and Rusatom Overseas, the company said. SRV president and CEO Pekka Ojala said. "The project required the participation of a reliable Finnish partner familiar with local legislation and regulations." Outokumpu CEO Mika Seitovirta explained that the company’s steel mills are the single largest electricity user in Finland. "Therefore it is in our interest to secure stable and reliable energy sources with no or low-carbon emissions. With Fennovoima, we will be able to cover approximately one third of our electricity demand."

In June Croatian energy company Migrit Solarna Energija had sought to take a 9% share in the project. That acquisition, however, was not approved by Finnish authorities after it became know that the company is closely affiliated with Russian business interests. Migrit Solarna Energija does not appear on Fennovoima’s ownership chart, which has been submitted to the ministry.

Hanhikivi-1 will be a 1200MWE VVER pressurised water reactor of the Russian AES-2006 type and is scheduled to begin commercial operation in 2024.