Five into Severn may go

The Severn Estuary’s 14m tidal range represents a huge source of predictable (though intermittent) low-carbon energy. The UK government’s feasibility and consultation process – which will take several years to come to a conclusion about whether to proceed with the exploitation of this potential – has compiled a short list of five schemes selected from ten contenders. Report by Leonard Sanford 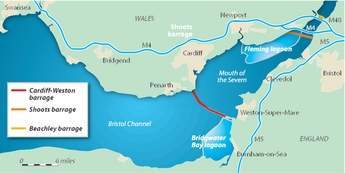 The UK government’s 2006 Energy Review resulted in an investigation of tidal power opportunities by its independent watchdog, the Sustainable Development Commission, and its report in 2007 concluded, with conditions, that there is a strong case for a sustainable Severn Barrage, and also potential for barrages in other locations such as the Mersey, Wyre and Thames rivers.

The government then launched a two-year feasibility study, being carried out by Parsons-Brinkerhoff, to investigate the costs, benefits and impact of a Severn tidal power scheme, to determine whether or not it could support such a scheme, and if so, on what terms. The study began in January 2008. It has now gone into a public consultation phase covering the selection process, the proposed shortlist, and the issues proposed for further investigation. The decision as to whether or not to support a Severn tidal power scheme will be taken following further consideration of the issues and a second public consultation, probably in 2010.

Ten schemes were put forward following a Call for Proposals in May 2008, including barrages, lagoons (land-connected and offshore), a tidal fence and a tidal reef. These proposed schemes were in varying stages of development, with some using tried and tested technology, and others using tested structures, but completely new materials. Some proposals were based on embryonic technologies which have never been prototyped or deployed, let alone at the huge scale proposed. The largest schemes span the Estuary from Minehead to Aberthaw (15 miles) while the smallest lie upstream of the Severn road crossings. Energy outputs also vary with the largest option (the Outer Barrage) estimated to generate up to 7% of UK electricity and the smallest roughly the same as a large fossil fuel power plant.

The ten long-listed proposals were assessed for their feasibility. In the context of the study, feasibility means whether the project has a realistic prospect of being built and whether it could meet the objectives of the study. Five key areas were identified as determining feasibility:

• The cost and amount of energy produced.

• Affordability and value for money for the public sector.

The short-listed schemes are all barrage or lagoon schemes based on relatively well understood hydroelectric technologies with a mix of existing and new engineering structures. Not all barrage and lagoon schemes have been short-listed. Some do not perform well in terms of the assessment criteria as they show, for example, extremely high cost of energy produced. Schemes involving new or untried technology such as the tidal reef or the tidal fence options, have not been included, but the UK?government is keen to consider innovative schemes that may be less environmentally damaging, and some of those that have been submitted to the feasibility study, although not sufficiently developed technically at this point for more detailed evaluation, may re-appear if further development, supported by a fund set up for the purpose, bears fruit.

The short-listed Cardiff-Weston barrage, with an estimated construction cost of around £21B (US$30M), is something of a special case. It would be more than five times the cost of other schemes on the proposed shortlist. Unlike the other options, its construction could not be funded by the private sector alone and taxpayers/consumers would likely bear a large part of the cost burden and risk. However, this barrage could also make a significant contribution to the UK’s energy goals and will therefore be studied further. This will allow the scale of environmental impact and options for mitigation and compensation to be studied.

The next phase of the feasibility study will make a strategic environmental assessment, considering the impacts of the various short-listed schemes – impact on the construction supply chain, on the energy market and grid, and on the ecosystem. The consequences of compliance with environmental protection legislation and the means of ensuring that environmental effects could be mitigated where possible, and compensated for if they cannot be mitigated, will also be considered. A further public consultation, probably in 2010, will seek views on the evidence gathered and the analysis, and will feed into the decision on whether a scheme could be taken forward with government support. The option not to proceed with any scheme remains open. If a Severn tidal power project does go ahead, the planning and consenting process may take 3-5 years, and construction at least a further 5-7 years, depending on the scheme selected.

The ten proposals were assessed for technical and commercial feasibility against a number of criteria, (see above) and the following schemes were provisionally short-listed:

• Shoots Barrage (1.05GW scheme located downstream of the new Severn road crossing with an estimated construction cost of £3.2B [US$4.6B])

• Beachley Barrage (625MW scheme further upstream of the first Severn road bridge with an estimated cost of construction of £2.3B [US$3.3B])

• Bridgwater Bay Lagoon (1.36GW impoundment on the English side of the estuary with an estimated construction cost of £3.8B [US$5.4B])

• Fleming Lagoon on Welsh Grounds (1.36GW impoundment on the Welsh bank of the Estuary with an estimated construction cost of £4B [US$5.7B])

• Cardiff-Weston (Lavernock Point to Brean Down) Barrage (8.46GW scheme, commonly known as the ‘Severn Barrage’, with an estimated cost of construction of £20.9B [US$29.9B]) being considered for a 2030 timescale.

This technical feasibility assessment is the first of several such procedures, and will be followed by a quantitative study (energy outputs and CO2 savings), levelised cost estimates, and a qualitative study (environmental, social/ regional and economic effects.

Beachley is the smallest barrage alignment considered by the study (625MW) and is located furthest upstream. This means it does not impact on the major ports and causes the least, although still potentially significant, intertidal habitat loss as it is located upstream of the confluence with the River Wye and might have a reduced effect on that river. Some fish mortality is still likely. This option would have a smaller energy output than the majority of other schemes – at least 90% smaller than the estimated output of the barrage from Minehead-Aberthaw. It is the cheapest in terms of capital cost and the unit cost of energy is a little higher than Cardiff-Weston, and lower than Bridgwater Bay lagoon. It is, therefore, one of the most affordable options. There are concerns over the potential build up of sediment behind a barrage at Beachley, which may impact on future maintenance costs and feasibility. This needs to be studied further. Given the affordability, unit cost and relatively smaller environmental and shipping impact, this option was included in the short-list despite its relatively small energy output.

Shoots is the largest barrage that could be taken forward with limited government involvement in risk and cost bearing. The unit costs of energy are the cheapest estimated for all the Severn options. These factors combine to make it one of the most affordable. It does not directly impede the major ports in the Estuary. Initial figures show that intertidal habitat loss may be smaller than similar output lagoon options, although this remains significant, as do current estimates of impact on fish. Shoots shares the sediment risk of the Beachley barrage. Given the relatively low unit costs of energy and capital cost, this option was proposed for inclusion in the short-list.

Cardiff-Weston (Lavernock Point – Brean Down) barrage could provide 4.8% of the UK’s electricity (based on estimated demand in 2020). The sheer scale of the capital cost is very challenging, estimated at between £19.6B (US$28B) and £22.2B (US$31.75B)0, depending on compensatory measures. Unit cost of energy figures are well below the cost thresholds set and are the second cheapest of all the schemes.

Cardiff-Weston could result in up to an estimated 20,000ha loss of intertidal habitat with significant damage to wildlife, and particularly migratory fish species as the barrier would be downstream of the tributary rivers of the Severn. It may offer tidal flood protection to the Gwent Levels and Avonmouth. During its operation ships docking at the regions major ports would have to pass through locks, which would add time and cost to their operation. However, the overall regional economic impact of a Cardiff–Weston barrage is estimated to be substantially positive.

A Cardiff–Weston barrage could be generating by 2020, even if not fully commissioned. However, this would be a best case scenario. There would still be a risk that it would not contribute significantly towards the 2020 renewables target.

Providing over £20B of finance for Cardiff-Weston, either publicly or privately, would be very challenging and it is unlikely that the private sector could carry this risk alone. Taxpayers/consumers would likely bear a large part of the cost burden and risk. The government will need to consider the macro-economic and fiscal impact this scale of spending and risk exposure would have on a 2020 timeframe. In this context, it may also be appropriate to consider the feasibility of the Cardiff–Weston barrage on a slightly longer timescale, nearer to 2030.

Given the potential broad similarities in environmental and regional impact, it was considered appropriate to study the lagoons that performed well in terms of the shortlisting criteria and have the potential to work in combination with other options (thereby producing more energy or energy at peak times) as the representative options. These are the Bridgwater Bay lagoon from the generic lagoons and the Fleming Lagoon at Welsh Grounds.

They are estimated to produce broadly similar energy outputs to each other, although are of slightly larger installed capacity than the Shoots barrage. Comparing each lagoon against Shoots helps inform what difference there is between the impacts of a lagoon versus a barrage. Each performs well on the short-listing criteria. The Bridgwater Bay lagoon has the lowest cost of energy out of all the lagoons and could potentially connect more easily to the existing electricity infrastructure at Hinkley Point. While the Fleming lagoon, located on the Welsh side of the Estuary in relatively shallow water uses a different form of wall construction, costs are within the cost thresholds set.

As with all the other types of schemes (barrages, lagoons, fences, reefs), there may be the potential to build a lagoon at different locations but a detailed understanding of the technology and impact of the lagoon concept gained from studying two schemes further was considered necessary for this feasibility study and for supporting a decision on whether lagoons could be the preferred option.