Canedo hydro power plant is located in the Tra?s-os-Montes region, in the north of Portugal, extending 5.5km through the municipalities of Boticas and Ribeira de Pena. The water is diverted from the Beca River, in the Douro river basin. The plant was designed by Aqualogus and is owned by Hidrocentrais Reunidas S.A. (RPGlobal). 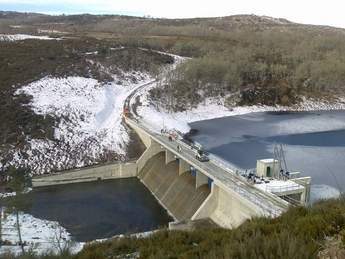 The scheme, which began operation in December 2008, comprises a dam, low pressure circuit, surge tank, penstock and the powerhouse. The installed power of 10MW is accomplished with a turbine flow of 5.4m3/sec under a net head of 226m.

The dam is 14.8m high and has a crest length of 92m, including a bridge over the spillway. The intake and bottom outlet are located on the left side. The 80m long fish pass and the reserved flow outlet are on the right river bank. The lake created by the dam floods an area of 4ha.

The powerhouse has one horizontal Francis unit and is located near a river beach, close to Canedo village. The building was subject to a thorough architectural study, which focused on integration with the striking surrounding landscape and interaction with the visitors. The cubic building facade on the river side is accessed by a pedestrian route and has openings that allow a full view of the interior. The architectural study of the building was subject to a concept contest in an architecture college.

The region has an ancestral winter irrigation method called rega de lima for protection against frost, where the water is conveyed through long open channels called levadas. The dam automation guarantees the release of the necessary irrigation flows in order to accommodate this concurrent water use.

The road to the dam and the bridge are important improvements for local population mobility by connecting the villages of Vilar and Codecoso.

The project was subject to two different impact assessments: during the preliminary project phase and after the design was concluded. Public participation took place in both assessments.

The impact assessment studies allowed the environmental characterization of the project site and confirmed its relevant conservation status – important fish species (Trout), birds (White-throated Dipper) and mammals (Pyrenean Desman). The riparian and surrounding vegetation is rich and diverse, with an important presence of oak forest typical of Northern (Atlantic) Portugal. The water quality is very good.

Several mitigation measures where carried out to cope with the environmental relevance of the site. This was combined with the study of an ecological stream flow regime that enables the preservation of the species and habitats downstream. An important feature concerns the compensation of the riparian habitat, namely by planting Black Alder, Grey Willow and Birch, and by protecting and planting oak trees.

A monitoring programme is in place, focusing on the water quality, flora and vegetation, fish fauna and riparian fauna.

View of the project’s fish pass

For further information visit the Aqualogus website at www.aqualogus.pt or RP Global’s site at www.rp-global.com