The tunnel boring machine (TBM) breakthrough has been achieved in the second inclined pressure shaft of the Parbati stage II hydroelectric scheme in Northern India. 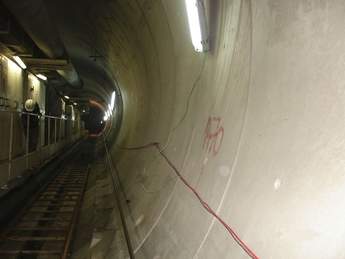 The Parbati hydroelectric stage-II (800MW) lies in the lesser Himalayan zone. It is one of the major hydro projects under construction for India’s National Hydroelectric Power Corporation (NHPC).

The Parbati river is a main tributary of the Beas river. The Parbati project proposes to harness the river in three stages. stage I: 750MW, stage II: 800MW and stage III: 501MW.

Stage II and Stage III are currently under construction, and are envisaged as run-of-river projects. The Stage III project, on the Parbati river, comprises a 85m high concrete dam and a concrete-lined headrace tunnel (HRT) 6m in diameter and 31.5km long up to a surge shaft. The tunnel carries water from the dam at Pulga (Barshaini) in the Parbati valley to a surge shaft near the village of Railah in Sainj valley. The dam will be just downstream from the confluence of the Tosh Nallah. The project includes a spillway section 30m long with four bays controlled by four radial gates, two 4.5m intake tunnels, and a 6m HRT.

The surge shaft, which is vertical, measures 17m in diameter and 130m deep. The water is carried from this shaft to two pressure shafts (3.5m in diameter), which then bifurcate into four penstocks of 2.5m diameter each. These feed water to turbines in the powerhouse.

The two pressure shafts, 48m centre to centre and designated as ‘left’ and ‘right’, are 2050m and 2120m long respectively. Of these lengths, 1545m of two shafts incline at 30º to the horizontal and contain a bored diameter of 4.88m with a finished diameter of 3.5m. A double-shield TBM has been used for excavating the inclined section of these pressure shafts.

Tunnel excavation in India is generally carried out using conventional drilling and blasting. The use of tunnel boring machine (TBM) is an exception.

The Parbati hydroelectric project is the only project in India that has used a TBM to excavate an inclined shaft. Now the second shaft is successfully bored through in a record period of 136 days. Mitsubishi designed the TBM specifically to work in an inclined tunnel. The double-shield TBM used for this job contained several prominent features.

Excavating the ‘right’ inclined pressure shaft began on 17 July this year. The final breakthrough was achieved on the evening of 30 November.