Alstom has unveiled the new headquarters of its global technology and hydropower centre in Grenoble, a centre of expertise which carries out all hydropower research and development for the company. 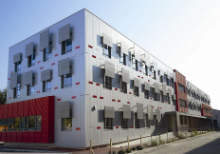 The centre was officially inaugurated by Patrick Kron, Chairman and CEO of Alstom, and Jérôme Pécresse, President of Alstom’s Renewable Power Sector, on 1 February in a ceremony attended by Delphine Batho, Minister of Ecology, sustainable development and energy, and Geneviève Fioraso, Minister of Research and higher education.
The Grenoble site houses 650 Alstom employees, including teams specialising in engineering, project management and manufacturing. There is also a plan to group together additional human resources and technical means on site in the near future.
Grenoble is Alstom’s headquarters and main site for an international network of hydropower experts. Alstom has developed other global technology centres which allow the company to be close to the market. They are located in Birr, Switzerland which specialises in alternators, Sorel-Tracy, Canada dedicated to service and renovation, Vadodara, India focused on Pelton turbines and abrasion resistance, in Taubaté, Brazil for Kaplan turbines and in Tianjin, China to meet the needs of the Chinese market.
The inauguration followed a major programme during the last few years to upgrade the site, and to double the capacity of its hydraulic test laboratory, which currently has six test-rigs.
Alstom has also announced the creation of an industrial chair dedicated to hydraulic machines at the Polytechnic Institute of Grenoble (Grenoble INP). The chair will be the first step in the creation of a centre of excellence in hydraulic machine research with broader aims and partnerships. The goal is to equip the centre with an additional turbine test-rig to be shared by the partners at the centre (Alstom, Grenoble INP, etc.).
This is the first partnership in France specifically for hydropower. It aims to develop solutions to allow Alstom’s customers to increase the production regulating capacity of their hydropower plants, and therefore better integrate the intermittent production of renewable energy sources on the grid. Designing turbines capable of adapting to greater variations in power levels is one of the major challenges today.
“Hydropower is experiencing a revolution; it has a new role to play in the evolution of the world’s energy mix. Hydropower has a great potential for growth worldwide, especially in Europe and we must be in a position to support intermittent energy sources such as wind or solar power. The development of our technological centre in Grenoble is fully in line with those targets", declared Maryse François-Xausa, Vice-President of Research and Development and Product Marketing at Alstom.
“When I arrived, I wanted from the start to take advantage of the heritage of Grenoble INP to forge partnerships with industry leaders. This partnership with Alstom has enhanced the ties between both our institute and the University of Grenoble", added Brigitte Plateau, General Administrator of the Polytechnic Institute of Grenoble.