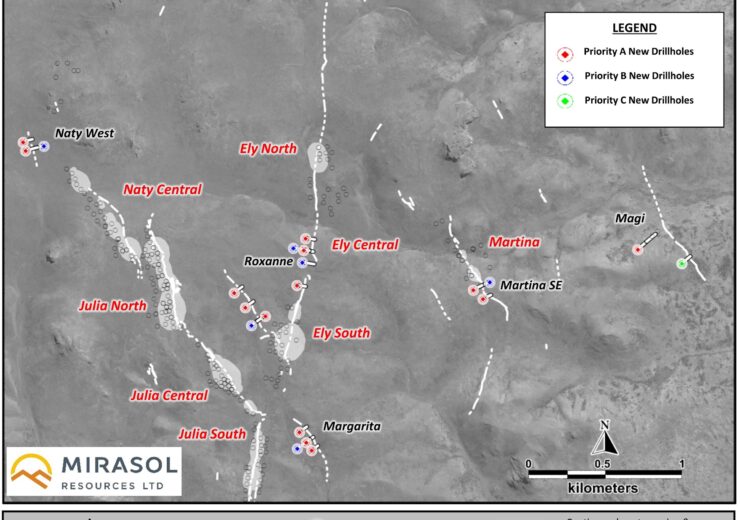 Mirasol Resources Ltd. (TSX-V: MRZ) (OTCPK: MRZLF) (the “Company” or “Mirasol”) is pleased to announce that drilling recently commenced at  its Virginia silver project, located in the province of Santa Cruz, Argentina. The Company is the operator under an option to purchase agreement (the “Agreement”) with Silver Sands Resources (CSE: SAND) (OTCQB: SSRSF) (“Silver Sands”).

Under the Agreement, Silver Sands is funding the first phase 2,500m drill program; part of a US$6 million exploration funding commitment over three years (see release May 21, 2020).  In addition, Silver Sands is to issue to Mirasol 19.9% of its shares outstanding over the three-year term. The first tranche representing 9.9% of Silver Sands outstanding shares, was granted to Mirasol in May of this year. Silver Sands has right to earn 100% interest in Virginia with the Company retaining a 3% Net Smelter Return royalty.

Mirasol’s Chair and Interim CEO, Patrick Evans, stated: “The Virginia project hosts a NI 43-101 indicated resource of 11.9 million ounces grading 310 g/t silver and an inferred resource of 3.1 million ounces grading 207 g/t silver. Exploration since the 2016 technical report has identified new trends of vein float with multiple assays over 500 g/t silver.  Drill-ready targets have been identified at ten vein structures with surface exposure and floats blocks with elevated silver grades. The potential to expand the Virginia resources is very good and we are excited to once again be drilling at Virginia.”

On the eastern most side of the vein field, where the Magi and Johanna veins are located, observed cooler silica species and textures together with comparatively lower surface silver grades in outcropping/subcropping expressions of the veins, appear to indicate a much higher level in the epithermal system than is found to the west. Previous limited drilling by Mirasol to shallow depths under these eastern veins showed a marked increase in silver grade with depth, indicating that completely preserved and higher-grade ore shoots might exist at depth.

Mirasol’s exploration team is also advancing rapidly with an on-going Pole Dipole induced polarity (“IP”) program in key target areas, in order to both better define drill hole locations and to identify potentially buried targets (Figure 2). Given that significant IP chargeability responses are directly associated with the Virginia resource, the current survey is as expected to provide valuable information that is being used as an indicator to identify the more prospective veins in the system. The current IP survey will cover vein structures with silver anomalies from rock chips and trench samples where there has been no previous drilling.

In parallel, a program of mechanical trenching is also underway (Figure 3). The primary focus of this program is to define the continuity of new vein targets, identified by previous geochemical rock chips sample programs, under cover. In addition, it will expose bedrock for assessment and geochemical sampling in prospective covered areas, which host coincident IP chargeability and ground magnetic anomalies.

These surface exploration programs are designed to identify additional new drill targets for prioritized testing in Q1 of 2021. To date, 49-line km of IP geophysics has been completed and 1,500m of trenches have been opened, with geological mapping and geochemical sampling currently underway. This first phase drill campaign is anticipated to be completed by mid-December. Assay results will be released as soon as they have been received, validated and interpreted.