The last phase of the planned works is the installation and commissioning of the upgraded DG500 kite system. 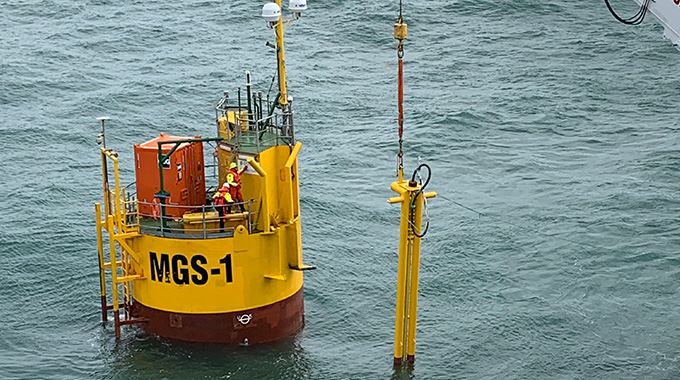 Image: The kite system is ready for load out and installation. Photo courtesy of Minesto AB.

Minesto’s has completed the test site infrastructure installations at the Holyhead Deep site off North Wales. After installing the upgraded infrastructure, the site is ready for installation and commissioning of Minesto’s DG500 kite system.

After a period of maintenance and upgrade, the microgrid system (MGS) buoy was lifted back into the sea from the quayside in Holyhead, towed to site and successfully reconnected to its pre-laid moorings. The MGS buoy, used for the first installation in Wales, handles and analyses generated electricity while also providing data communications with Minesto’s marine energy converter DG500.

Unstable weather all over the UK then interrupted some of the marine operations that was planned for the weekend. When operations were resumed, the subsea umbilical connecting the DG500 kite system with the MGS buoy could be installed. During the last few months the umbilical has been modified to incorporate a dry-mate connector in order to make it much easier to connect and disconnect the DG500 kite system offshore.

The last phase of the planned works is the installation and commissioning of the upgraded DG500 kite system. All the onshore commissioning tests have been successfully completed and the kite system is ready for load out and installation. This will be carried out in the next suitable weather window and as soon as practicable after some testing of the offshore infrastructure.

David Collier, the chief operations officer, on board the installation vessel, stated; “I am very pleased with the good progress made to date by our installation team, in spite of the changeable weather. After all of the hard work our teams have put in over the winter months in upgrading and preparing the systems, I am really looking forward to continue testing of the DG500 kite system.”