Mitsubishi Heavy Industries (MHI) has signed a Memorandum of Understanding (MOU) with the Government of New South Wales in Australia to offer a range of solutions for energy management and other technologies. 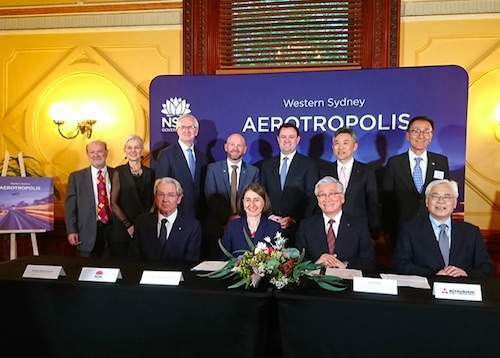 The MoU is part of the comprehensive development plan for the Western Sydney region being undertaken by the state.

It was signed by New South Wales Premier Gladys Berejiklian, and for MHI by Ken Kawai, Chief Regional Officer for Asia Pacific and India. The ceremony was attended by ambassadors from both countries, and other dignitaries.

The principal objective of the agreement is to provide the New South Wales Government, in conjunction with the Australian Federal Government and eight municipalities in the Western Sydney region, with energy management solutions and the high quality social infrastructure that is a specialty of MHI Group, to support the Second Sydney Airport, scheduled for completion in 2026, and the surrounding area.

The New South Wales Government, which is coordinating the infrastructure development for the region, formulated a plan to decentralize city functions by creating several central business districts (CBDs) in the Sydney metropolitan area.

In addition to the Sydney CBDs, the government has begun a second CBD development program by inducing state government agencies to relocate to suburban areas, with participation from leading companies, universities, and research institutions.

MHI Group is proposing an environment-conscious style of urban development that makes full use of advanced technologies and related systems, such as optimal energy management methods for the urban development of Western Sydney, as well as industrial parks and the airport. The proposal makes proactive use of the results from smart community demonstration projects MHI Group undertook for the vicinity of Kyoto Prefecture, and other projects outside Japan.