Mainstream Renewable Power has announced the installation of first turbine at the 170MW Sarco wind farm in Chile. 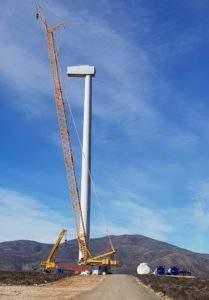 Image: Sarco wind farm sees completion of the lifting of the first of its 50 wind turbines. Photo courtesy of Mainstream Renewable Power.

“Transporting, unloading and installing the turbines presents a significant challenge given the weight and dimensions of the different components that make up the wind turbine.”

The wind farm is located approximately 70km to the southeast of the city of Vallenar in the Atacama Region in northern Chile.

Aela Energía is the joint venture company owned 60% by private equity investor Actis and 40% by Mainstream.

The company was awarded contracts to build and operate the Sarco wind project, which will supply regulated customers in Chile’s SIC electricity system.

Mainstream said that components for the project were transported over a distance of 160km from the Port of Las Losas in the city of Huasco to the project site in the commune of Freirina.

The firm said in a statement: “The wind turbines, which are 149m in height, can take between 1 to 3 days to lift. This is a highly complex process that must be carried out in favourable weather conditions.”

The Aela joint venture obtained US$410m in project financing in August 2017, bringing the projects to financial close and allowing construction to proceed.