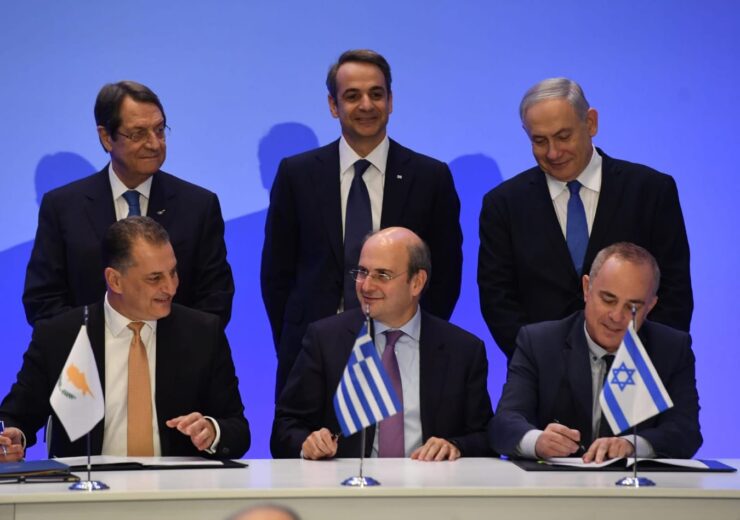 Signing of the EastMed Gas Pipeline accord in January 2020. (Credit: Haim Zah, CPO/Government of Israel)

The Israeli cabinet has approved a previously signed trilateral agreement with Greece and Cyprus for the development of the €6bn Eastern Mediterranean pipeline project (EastMed Gas Pipeline) by IGI Poseidon.

As per the agreement signed by the three countries, the proposed pipeline will run from Israel’s territorial waters via Cyprus and Greece to Europe.

Details of the EastMed Gas Pipeline

The proposed 1,900km long offshore/onshore pipeline will deliver natural gas from Israeli and Cyprus’ Exclusive Economic Zone (EEZ) waters to Europe. The pipeline, which is likely to be made up of a 1,300km offshore section and a 600km onshore section, is proposed to be laid between Israel to Greece and further extended to Italy.

According to IGI Poseidon, the EastMed Gas Pipeline will initially transport 10 billion cubic meters of gas per year (Bcm/y) from the gas reserves located in the Levantine Basin in Cypriot and Israeli waters. There is a possibility of increasing the capacity of the pipeline to 20Bcm/y at a later stage.

The natural gas will be delivered to Greece, and in conjunction with the Poseidon and IGB pipelines, into Italy along with other southeast European nations.

IGI Poseidon is a 50:50 joint venture created by the Public Gas Corporation of Greece (DEPA) and Italian energy group Edison.

The joint venture is slated to take a final investment decision on the EastMed Gas Pipeline within two years with the project targeted to be completed in 2025.

The pre-FEED study of the midstream project is said to have shown that it is feasible technically, economically, and also commercially. The project is backed by the European Union, which is co-financing it through the Connecting Europe Facility programme.