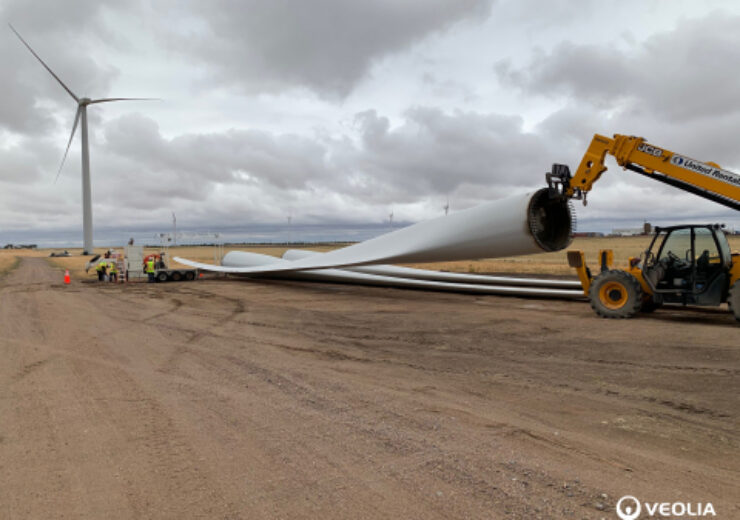 A wind turbine blade being prepared for removal after it has reached the end of its life cycle. (Credit: Business Wire.)

Under the terms of the multi-year agreement, GE plans to recycle blades that are removed from its US-based onshore turbines during upgrades and repowering efforts.

The company is planning to recycle majority of the blades which are replaced during repowering efforts with VNA.

As part of the contract, Veolia will process the blades for use as a raw material for cement, using a cement kiln co-processing technology.

According to GE, blades that have been removed from the wind turbines will be shredded at VNA’s processing facility in Missouri.

Later, it will be used as a replacement for coal, sand and clay at cement manufacturing facilities across the US.

GE Renewable Energy Digital Services business CEO Anne McEntee said: “Sustainable disposal of composites such as wind turbine blades has been a challenge, not only for the wind turbine industry, but also for aerospace, maritime, automotive and construction industries.

“VNA’s unique offering provides the opportunity to scale up and deploy quickly in North America, with minimum disruption to customers and significant benefit to the environment.

“We look forward to working with them on this effort to create a circular economy for composite materials.”

At the Missouri processing facility, VNA employs 20 people from the area.

GE Renewable Energy said that it is committed to reducing environmental impacts throughout the life cycle of its products.

The company has also announced an ambitious pledge in 2019 to decarbonise its operations and achieve carbon neutrality by the end of 2020.