The foundation concreting at the VVER-TOI power block reactor building of the Kursk NPP-2 construction site has been completed ahead of schedule, in Russia. 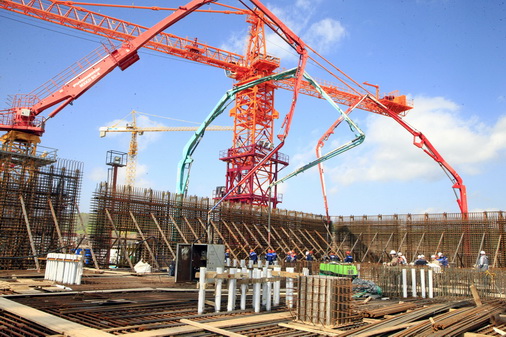 Over 16.7 thousand cubic meters of self-consolidating concrete were placed into the foundation. The reinforcement blocks for the foundation were pre-manufactured at a special plant and weighed around 1500 tons in total. This is comparable to the amount of materials required to build a residential area of 15 five-storeyed houses with three entrance halls.

The concreting operations were carried out non-stop 24/7 with constant mixture quality control.

Once the concrete in the foundation solidifies and all laboratory trials are completed, the reinforcement blocks installation and walls concreting begin. Following that, the first piece of heavy and large equipment is to be assembled by the end of this year, specifically – the reactor’s molten core catcher (so-called ‘melt trap’) designed to facilitate top-notch environmental secutiry.

As of now, over 2.8 thousand people work at the construction site.

It is important to note that recently the European electricity producers organization has announced that the innovative VVER-TOI project complies with the applicable European Utility Requirement (EUR) standards.

The goal of the modern VVER-TOI project is to make Russian technologies competitive on the international scale and is aimed at serial construction of VVER-TOI reactor type NPPs both in Russia and all over the world.
Source: Company Press Release