Mundoro Capital has signed an earn-in agreement with Freeport-McMoRan Exploration whereby Mundoro has optioned to earn-in to its Savinac and Bacevica exploration licenses (Freeport-Mundoro JV Project) located within the southern portion of the Timok Magmatic Complex (“Timok”) in Serbia. 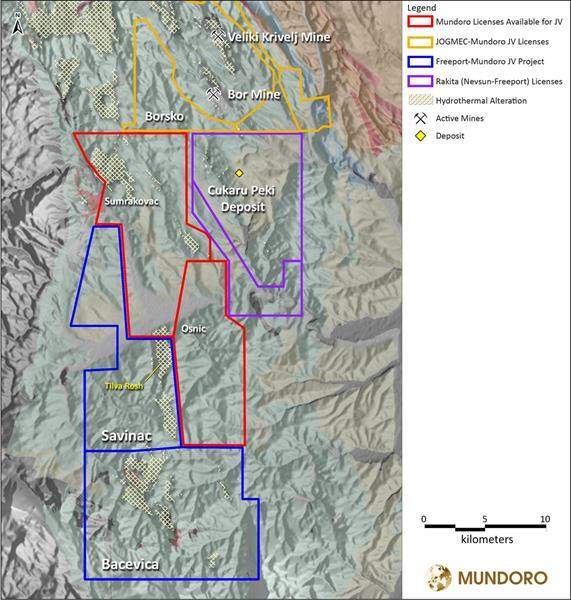 Timok is one of the most prolific metallogenic domains in the Tethyan Belt. Timok hosts the Cukaru-Peki deposit and the Serbian state-operated producing mines: the Bor copper porphyry underground mine (“Bor Mine”) and the Veliki Krivelj copper-gold porphyry open-pit mine (see Figure 1: Location Map).

Teo Dechev, CEO and President of Mundoro commented, “This Agreement is our third partnership in Serbia, which reflects the continued industry interest in Timok, the Tethyan Belt and demonstrates the prospectivity of Mundoro’s land package within this region.  Mundoro has approximately C$4.6 million (US$3.5 million) in treasury, an earn-in agreement with JOGMEC for the Timok North Projects, an earn-in agreement with Freeport for the Freeport-Mundoro JV Project, and an option agreement with a private company for the Saje Project in Bulgaria. Realizing value for our mineral property portfolio of over 10 licenses with multiple targets on various license is one of our corporate priorities.”

Pursuant to the Agreement, Mundoro has granted to Freeport an option to earn, over two phases, up to a 75% interest in the Freeport-Mundoro JV Project by sole funding expenditures of up to US$45 million (C$59.2 million) as follows:

Following Phase One, Freeport has the right, exercisable within 60 days, to elect to enter Phase Two, whereupon it can earn an additional 24% interest in the Freeport-Mundoro JV Project, for a total 75% interest, by sole-funding an additional US$40 million (C$52.6 million) in expenditures (the “Phase Two Option”) by the fifth anniversary of the election date.
If Freeport (a) elects not to enter Phase Two, or (b) does not satisfy the Phase Two Option, then Freeport will, for a period of ten (10) years thereafter, pay to Mundoro an annual fee of US$100,000 (C$131,675) in each year in which the annual work program and budget adopted by the joint venture is a work program and budget proposed by Freeport.
Additional Terms:

The Agreement is subject to: (i) Freeport’s satisfaction with, or waiver of, a due diligence condition; and (ii) the transfer of the Freeport-Mundoro JV Project from a current Mundoro Serbian subsidiary to a special purpose Serbian subsidiary wholly-owned by the joint venture.
If either party’s interest in the joint venture is reduced below 10% through dilution, the diluted party’s interest will be converted to a 2% Net Smelter Returns Royalty (“NSR”) of which up to 1% NSR can be re-purchased.
Project Information

Savinac license is a 90 sqkm area that is located 15 km southwest of the Bor Mine. The property contains a significant area of hydrothermal alteration covering 14 sqkm elongated north-south area which hosts epithermal and porphyry targets marked by Cu-Mo-Au-Ag-Pb-Zn geochemical anomalies. The 9 km of hydrothermal alteration is defined in alteration mapping and coincides with an elongate zone of demagnetization of the host volcanic rocks.  Within the hydrothermal alteration, exploration work identified the Tilva Rosh epithermal gold target which contains 12 m of 30 g/t gold and 171 g/t silver.  Drill results from Tilva Rosh identified the continuation of the main north-south trending mineralized structure which strikes towards the north and under a lithocap that remains untested.  The targets identified to date either require further exploration work or remain untested.