Monterey Minerals announced that it has signed a letter of intent (LOI) to purchase CTTR Mining Tenements of Perth, Australia. 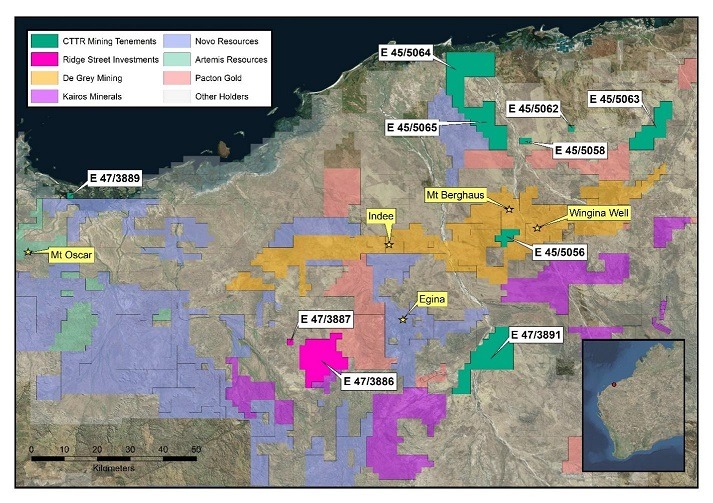 CTTR Mining owns seven highly prospective tenements in the Pilbara Basin covering 525 square kilometres. As outlined in the LOI, the Company will buy all the shares of CTTR Mining for 7,000,000 common shares of Monterey. The Company will look to complete a definitive purchase and sale agreement in Q2 2019.

President and CEO, James Macintosh stated “With the signing of the LOI with CTTR Mining, our property portfolio in the Pilbara Basin will increase to 670 sq.km. of highly prospective exploration properties. We believe in the opportunity presented by the exploration potential of the Pilbara Basin and will continue to look for additional prospects in the area.”

CTTR Mining’s tenement E47/3891, comprising roughly 155 sq.km., is adjacent to Novo Resources / Pioneer Resources Egina Project and directly to the northeast of Kairos Mineral’s Croydon Project, where Kairos has discovered over 390 nuggets in conglomerates over the last six months.

CTTR Mining’s tenement E45/5056, comprising approximately 20 sq.km., is surrounded by De Grey Mining Ltd.’s (“DeGreey”) Pilbara Gold and Turner River Base Metals Projects. The lease is within the Central Pilbara Tectonic Zone, situated between the Indee Fault to the north and the Tabba Tabba Shear Zone to the south. Adjacent to the property is De Grey’s Wingina Mining Centre.

CTTR Mining’s tenement E45/5063, comprising roughly 85 sq.km., lies 4 km to the north of the Tabba Tabba Shear Zone and directly south of the Indee Fault, which transects part of the tenement. The property is adjacent to and immediately northeast of the Pacton Gold – Arrow Minerals Joint Venture, and a 5km to the north of De Grey Mining’s Pilbara Gold Project along the Tabba Tabba Thrust.

CTTR Mining’s tenements E45/5064 and E45/5065 collectively cover over 245 sq.km. about 20 km to the west of Port Hedland. The property is underlain by granitoids of the Sisters Supersuite and the Split Rock Supersuite as well as sediments of the Mallina Basin, which form part of the De Grey Superbasin within the Pilbara Craton. There are notable occurrences of the Constantine Sandstone Formation, which forms part of the Croyden Group. Novo Resources hold an extensive group of tenements immediately to the west, while Arrow Minerals holds a large land position to the immediate south.