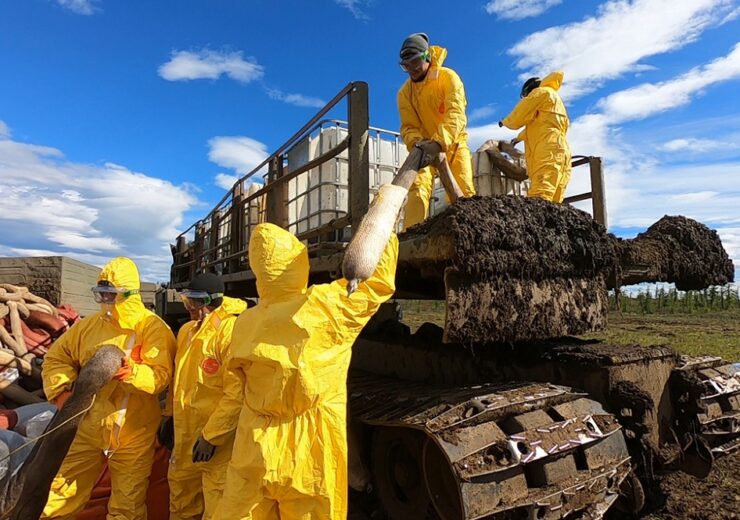 The clean-up operation at the Ambarnaya River (Credit: Norilsk Nickel)

Russia’s environment watchdog has taken legal action against a subsidiary of mining giant Norilsk Nickel (Nornickel), seeking compensation for damage caused by a huge diesel spill in the country earlier this year.

The Federal Service for Supervision of Natural Resources (Rosprirodnadzor) is seeking 148 billion roubles ($1.97bn) from Norilsk-Taimyr Energy Company JSC (NTEC) – the power producer whose facility in the Arctic region of Norilsk was the source of a fuel leak that contaminated vast areas of nearby soil and waterways.

More than 21,000 tonnes of diesel spilled from a damaged storage tank on 29 May, in an incident that prompted Russian President Vladimir Putin to call a state of emergency to support the clean-up operation and express public frustration with the handling of the situation.

Rosprirodnadzor had previously asked the miner to pay the fine voluntarily, but has now applied to the courts to retrieve the sum, which it says will be used to repair ecological damage to the Ambarnaya and Daldykan rivers.

Norilsk Nickel, which is the world’s largest producer of palladium and one of the largest nickel, copper and platinum producers, said the legal application for compensation was “premature”, because the final amount of recovered diesel has not yet been assessed.

Environmental assessors have likened the fuel spill to the 1989 Exxon Valdez disaster, in which a shipping collision released almost 11 million gallons of crude oil into Alaskan waters.

The cause of the Norilsk diesel leak has been traced to a collapsed storage tank at the CHPP-3 power plant following a subsidence of its support structure.

Thawing of the Arctic permafrost on which the facility is built is believed to be the cause of the failure.

During August and September, Rosprirodnadzor carried out unscheduled on-site inspections of the NTEC facility.

It found the majority of power-producing equipment dates back to the mid-point of last century, and in many cases is “obsolete and is in a physically worn out state” having not been repaired or reconstructed.

“The revealed violations indicate the lack of proper control over the technical condition of the operated life-support facilities, which creates a threat of pollution of environmental components, and, as a consequence, harm to the environment,” the agency noted.

It added seven company officials have been identified who “violated mandatory requirements”. Criminal investigators in Russia have previously announced inquiries into individuals linked to the incident over alleged negligence and reporting failures.

The incident has caused friction between Nornickel – which is controlled by Russia’s richest man Vladimir Potanin – and the second-biggest shareholder Rusal, which has demanded an executive shake-up in response.

In a July statement, Rusal, which has invested $14bn into Nornickel shares, said the situation in Norilsk had led it to “seriously question the competence of the company’s management”.

It also raised questions about the board of directors’ “seeming inability to have any influence on the ongoing situation”.

“One has to wonder whether they realise that through their collective inertia, this is likely to lead to severe and damaging criticism from the environmental and investment communities,” it added.