Diamondiferous gravel was extracted, transported, and processed through a nearby first-stage recovery plant 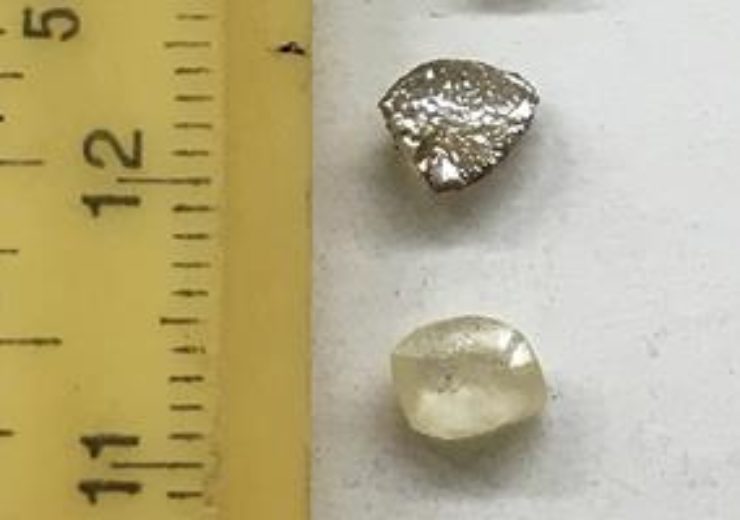 Brazil Minerals announced that the first run of the production of diamonds from its current mining site was better than expected. Diamondiferous gravel was extracted, transported, and processed through a nearby first-stage recovery plant. The resulting high-probability partially-processed ore was then further separated by granulometric characteristics into “small”, “medium”, and “large size” material, each of which needs to be further processed for final recovery of rough diamonds. The attached photograph shows two of the rough diamonds recovered from the first complete run of the “small size” material.

The operating team at Brazil Minerals was pleasantly surprised as these initially-recovered diamonds were on average bigger than those retrieved under similar methodology from other mining areas in the same district, and their concentration was higher as well.

As previously disclosed, in prior areas mined by Brazil Minerals in the same Jequitinhonha River Valley mining district, over 95% of the produced rough diamonds were gems suited for jewelry use. The Company had several rough diamonds polished, certified, and graded at the Gemological Institute of America (“GIA”) in the U.S., which is considered a premier analytical laboratory for gems. Their highest color grade was “E”, the second-best color (note: the scale starts at “D”). Their best clarity was “VVS1”, the second-best clarity. The majority graded F-G for color and VVS2-VS2 for clarity, and weighed between 0.4 and 2.0 carats. The Rapaport valuation of such Brazil Minerals’ GIA-graded diamonds was $3,250 per carat.

The Company will further process “medium size” and “large size” partially-processed ore in the next several days.  Careful analysis of these results is important because the recovery steps are adaptable to the granulometric characteristics of the rough diamonds seen. The goal is to maximize the yield on diamond recovery prior to processing stockpiled ore. Below is a photograph of part of the diamond recovery facilities and members of our technical team.