Boralex Inc. ("Boralex" or the "Corporation") (TSX: BLX) announces the commercial commissioning of the Basse Thiérache Nord wind farm with 20 MW of installed capacity, located in the Aisne department of France. 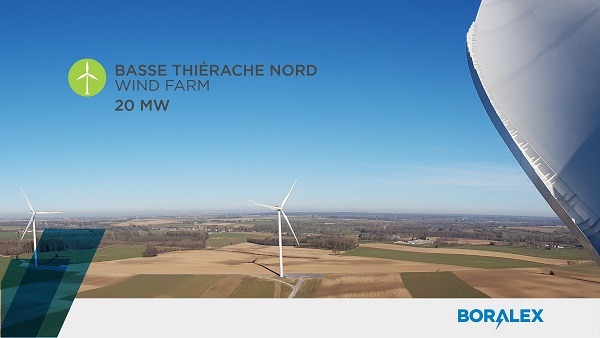 With the commissioning of this wind farm, Boralex’s capacity increases to 941 MW in France and a total 1,962 MW worldwide.

“Basse Thiérache Nord is being commissioned shortly after the Sources de l’Ancre and Le Pelon wind farms. We’re starting 2019 with the same momentum we achieved in 2018. This success proves the collective capacity of Boralex’s teams to meet their set objectives and commitments.” said Patrick Decostre, Vice-President and General Manager, Boralex Europe.
The 15-year contract for difference for the wind farm comprising six V112 Vestas Wind Systems wind turbines rated at 3.3 MW each was entered into in two phases with Electricité de France (EDF), consisting of Tranche 1 (BTN1) on February 1, 2019 and Tranche 2 (BTN2) on March 1, 2019. The wind farm is expected to contribute €3.5 million (or C$5.3 million) to Boralex’s annualized EBITDA(A). The anticipated power production of this site is more than 53,000 MWh.

At full capacity, the Basse Thiérache Nord wind farm will meet the average annual power needs of nearly 18,000 households, or about 8,000 people.