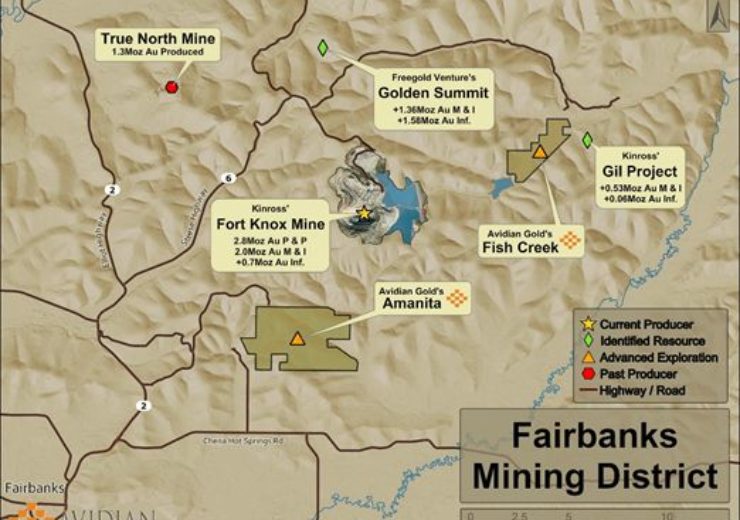 Avidian Gold Corp. (“Avidian” or the “Company”) (AVG.V) is pleased to announce that it has agreed to terms and signed a Binding Letter of Intent (“LOI”) with Keltic Enterprises Inc. (“Keltic”) to acquire a 100% interest in the Fish Creek gold property. The Fish Creek gold property is a State of Alaska mineral lease totaling 418 hectares (1032 acres) and is located 6.5 km east of Kinross Gold’s Fort Knox Gold Mine and immediately west of Kinross’s Gil deposit (Figure 1) in the Fairbanks Mining District. Please note: mineralization hosted on adjacent and/or nearby properties is not necessarily indicative of mineralization hosted on the Company’s property.

David Anderson, Chairman and CEO of Avidian states: “The acquisition of the Fish Creek project is a continuation of our plan to acquire additional properties in the Fairbanks Mining District and Fort Knox area in particular. This is a prolific gold district that lends itself to favourable metallurgy through heap leaching of oxidized mineralization. We have seen oxidation profiles similar to Fort Knox in mineralization identified on our Amanita prospect located 5.5 kilometres south of the Fort Knox pit and anticipate a similar situation at Fish Creek. We look forward to continuing exploration at Amanita and initiating exploration at Fish Creek this summer.”

The Fish Creek project has potential to host both lode and placer gold deposits due to its shared regional geology and down-slope location from both Kinross Gold’s Fort Knox mine and their Gil project. The Fish Creek property has been primarily explored for placer gold but intrusive bodies interpreted from geophysics are evident on the property. Lode gold deposits in the Fairbanks Mining District are typically associated with intrusive events.

The Fish Creek property has excellent road access and is located on a drainage system that was mined extensively for alluvial gold in the past both upstream and downstream of the property boundaries. Very widely spaced placer drilling over a large area of the property conducted in 1996 indicated the presence of placer gold in alluvial deposits. More extensive and closer spaced placer gold drilling conducted in 2004 confirmed the presence of significant concentrations of placer gold on the claims (SEDAR filed technical report: Linux Gold Corp., May 6, 2005).

Outcrop on the property is scarce consequently most of the historical exploration has been focused on placer exploration. Avidian’s prime focus will be on exploring lode gold potential although consideration will be given to placer gold potential to fund future exploration.