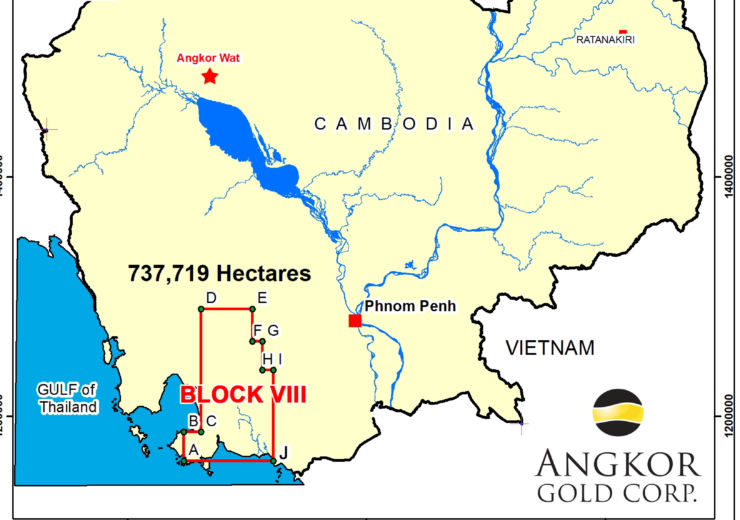 Angkor, through its subsidiary EnerCam Resources, has received the approval of the Royal Government of Cambodia on its application for a 7300 square kilometre oil and gas concession in Cambodia.

The Royal Government of Cambodia has approved Angkor’s request for the development of Petroleum Block VIII through its subsidiary EnerCam Resources Co. Ltd. With this approval, Angkor is now proceeding with the negotiation of the Production Sharing Agreement (PSA) with regard to the license. This approval also allows Angkor to pursue oil and gas exploration on Block VIII.

“This is a major milestone for Angkor,” said Angkor CEO Stephen Burega. “Angkor is the first Canadian exploration company to be granted this level of approval to pursue oil and gas opportunities in Cambodia. After review, the Royal Government of Cambodia has determined Angkor’s subsidiary EnerCam to be technically qualified to explore and develop this oil and gas concession. With the long-term expertise and commitment of Angkor’s Executive Chairman Mike Weeks in foreign oil and gas projects and in Cambodia, we are well positioned to expand in SE Asia’s extractive sector. Angkor looks forward to negotiating the Production Sharing Agreement and commencing our seismic and data review as soon as possible.”

“We are very pleased to be working with Angkor in developing Cambodia’s oil and gas potential,” said His Excellency Cheap Sour, Director General for the General Department of Petroleum of Cambodia’s Ministry of Mines and Energy.

Petroleum Block VIII is located in the Kampong-Som Basin, a recently recognized and unexplored onshore sedimentary basin in southeastern Cambodia. It was first identified and interpreted as a foreland basin in 2016 by researchers from the Danish Geological Survey who were interpreting a marine seismic database off the south coast of Vietnam.

The Kampong-Som Basin has some of the characteristics of other oil-bearing foreland basins. Although Cambodia has traditionally been viewed primarily as a country with mining and mineral resource opportunities, sizeable oil and gas reserves have been developed on three sides of the country including the Gulf of Thailand to the west, the Khorat Plateau of Thailand to the north, and in the Vietnamese Cuu Long Basin of the South China Sea to the south.

“I have been reviewing all available data and the geological setting for several years,” said Rosenthal. “Although the onshore portions of the country have yet to be explored by drilling, regional geological and geophysical work has identified a number of thick (2 to 4 km) onshore sedimentary basins of Paleozoic-Mesozoic age. These basins exhibit some of the requisite parameters for hosting substantial hydrocarbon accumulations including thick porous reservoirs (sandstone and limestone), thick sequences of high TOC (total organic carbon) potential source rocks of appropriate thermal maturity, and structurally-defined trapping configurations.”