This is the second project loan for the ADB-supported $500 million multi-tranche financing for Tamil Nadu Urban Flagship Investment Program, approved in September 2018 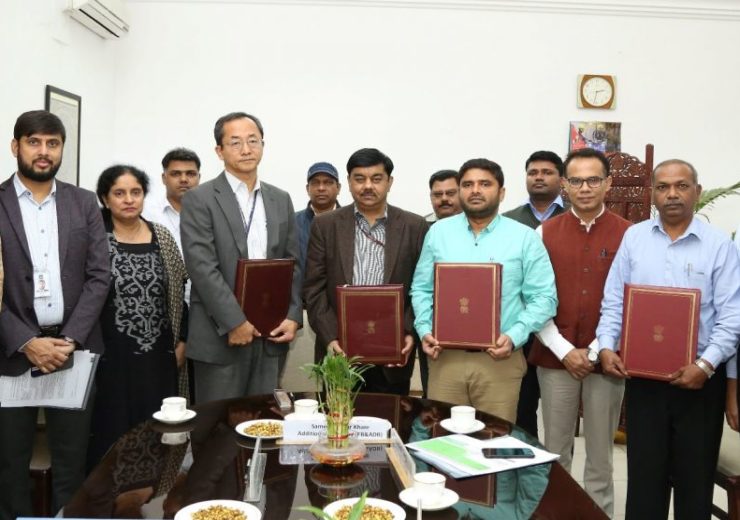 Image: ADB Country Director for India Mr. Kenichi Yokoyama and Additional Secretary (Fund Bank and ADB) of the Department of Economic Affairs in India’s Ministry of Finance Mr. Sameer Kumar Khare during the signing ceremony on 2 December 2019, along with other officials. Photo: courtesy of The Asian Development Bank (ADB).

The Asian Development Bank (ADB) and the Government of India today signed a $206 million loan to develop water supply and sewerage infrastructure in 5 cities of Tamil Nadu and strengthen capacities of urban local bodies (ULBs) for improved service delivery.

This is the second project loan for the ADB-supported $500 million multi-tranche financing for Tamil Nadu Urban Flagship Investment Program, approved in September 2018, that will overall develop climate-resilient water supply, sewerage, and drainage infrastructure in 10 cities of Tamil Nadu. The first project under the program with $169 million financing is currently under implementation.

The signatories to the loan agreement were the Additional Secretary (Fund Bank and ADB) of the Department of Economic Affairs in India’s Ministry of Finance Mr. Sameer Kumar Khare and ADB Country Director for India Mr. Kenichi Yokoyama.

“The project is aimed at improving the lives of the urban people in the identified cities of Tamil Nadu by providing universal access to water supply and sanitation and improving sewage treatment and drainage systems. Project initiatives are also expected to help the state develop the requisite ecosystem for economic growth,” said Mr. Khare after signing the loan agreement.

The project will target four cities—Ambur, Tiruchirappalli, Tiruppur, and Vellore—for developing sewage collection and treatment and drainage systems by setting up or rehabilitating sewage treatment plants, pumping stations, and connecting all households in the project area to the sewerage network, including below poverty line households. Wastewater reuse for industry will also be achieved in at least 4 cities. Improvement to water supply systems would be targeted in the cities of Madurai and Tiruppur through the commissioning of over 1,260 km of new distribution lines to connect nearly 190,000 households with metered water supply, including below poverty line households. In addition, nearly 200 kilometers (km) of new transmission mains and 230 km of feeder mains would be constructed, along with two new water treatment plants.

The project will also strengthen the capacity of the Commissionerate of Municipal Administration in Tamil Nadu for new project development, and monitoring and benchmarking quality of services across the 135 urban local bodies in the state.