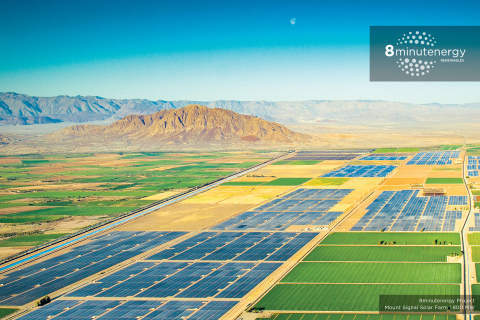 Located in the city of Calexico in California’s Imperial Valley, the Mount Signal 3 solar project is a part of the planned 800MW Mount Signal Solar Farm.

8minutenergy CEO and founder Martin Hermann said: “We’re proud to hit this exciting phase of the Mount Signal solar cluster–one of the largest in the world.

“This project is important to the Imperial Valley’s future given the amount of abundant and reliable solar power that will be delivered to the region for decades to come.

“As the original developer of the 260 MW Mount Signal 1 project, we are thrilled to see the next project coming to fruition.”

Planned to be start commercial operation by the end of 2018, the Mount Signal 3 project was acquired by Capital Dynamics last year.

However, 8minutenergy is continuing as the developer of the project, which is backed by a long-term power purchase agreement (PPA) signed earlier with Southern California Edison.

“8minutenergy demonstrated its world-class development and construction management capabilities with a project ahead of schedule and on-budget.”

Mortenson Construction is serving as the engineering, procurement, and construction (EPC) contractor for the Mount Signal 3 project, which will feature 2.8 million thin-film solar panels supplied by First Solar and solar trackers provided by NEXTracker.

Upon completion, the Mount Signal 3 is expected to generate over 770 million kilowatt hours (kWh) of clean, renewable electricity required to power more than 114,000 homes.

Being built upon 2,000 acres of formerly low-productivity farmland, the project is expected to reduce carbon emissions by more than 530,000 metric tons each year.

It will create over 600 jobs during construction phase in the region.

8minutenergy has 8.5GW of PV and storage under development in North America, operates 800+ MW in solar assets.