New developments in wind turbine foundation design are underway, with the aim of overcoming the cost and logistical barriers typically associated with installation 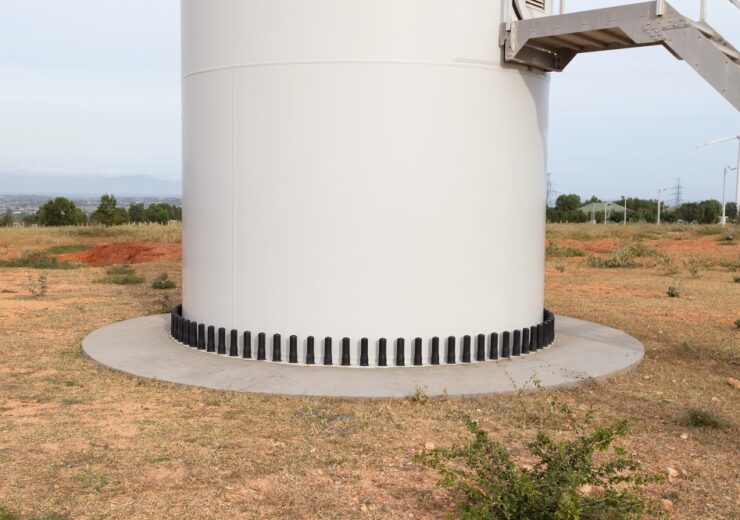 An innovative foundation technology is to be introduced at RWE’s 342 megawatt (MW) Kaskasi offshore wind farm. For the first time ever in the renewables industry, special collars will be installed around the monopile foundations at seabed level.

The “collared monopole” design is based on an RWE patent. The new technology will provide additional support for lateral loading, increase the bearing capacity and improve the structural integrity of the entire foundation – especially in difficult ground.

RWE Renewables has signed a contract with DEME Offshore for the transport and installation of the new foundation technology at Kaskasi, located in the German North Sea, 35km north of the island of Heligoland.

Kaskasi will also be the first commercial offshore wind farm in the world to use the vibro pile driving technique to drive all the monopile foundations to target penetration. Vibro pile driving is expected to reduce both installation time as well as noise emissions for marine life.

The Kaskasi offshore wind farm, due to enter commercial operation in summer 2022, will consist of 38 monopile mounted wind turbines, each rated at 9MW.

Installation of the foundations is expected to start in the third quarter of 2021.

When target monopole penetration is reached, the foundation collars will be installed at three wind turbine locations.

The detailed design of the collar was developed by the German civil engineering company JBO, based on the RWE patent. Bladt Industries was selected as manufacturer.

DEME Offshore will transport the three collars from the manufacturer’s load-out port in Aalborg, Denmark, to the Kaskasi site. The DEME Offshore team will then install the three steel collars, making use of the versatile jack-up vessel Neptune.

The collars will be installed at seabed level in water depths of up to 25m. The space between collar and monopile foundation will be filled with grout material to create a stable connection.

RWE will carry out testing to verify that the collar improves the structural behaviour in comparison to standard monopoles.

While wind turbines have undergone enormous development in recent years, there has been a technological standstill when it comes to building their foundations, the company says.

The idea of developing and selling an improved foundation technology came about through discussions with the Hessian project developer Burg Lichtenfels Energie.

The company was looking for innovative ideas for building foundations for a wind farm project. “Classic in-situ concrete foundations are not very popular, especially with property owners, as their dismantling has not been fully clarified and considerable costs can arise for property owners if dismantling guarantees are not adequately enforced,” notes Christoph Schwenzer, project manager at Burg Lichtenfels Energie.

While classic foundations are made of concrete which is poured on-site, Anker’s foundation consists of individual parts that are prefabricated under controlled conditions, and then assembled on the construction site. No heavy transport is required and the foundation can be installed in three days.

At the start of 2019, Anker built a first version of the foundation for an Enercon E-115 turbine. Since then, the foundation has been continuously developed and adapted to systems from a wide variety of manufacturers, Nordex, Vestas and SiemensGamesa, as well as Enercon.

The foundations have been mass-produced at WEC Turmbau in Emden since the beginning of October 2020.

“We are proud of what we have achieved in a comparatively short time”, says Gregor Prass, Anker’s foundation-specialist engineer (and MD). But “we don’t want to rest on our laurels” and are currently “focused on finding licensees around the world who want to produce or offer our foundations”.