Which major companies have signed up to the We Mean Business coalition to combat climate change?

The 87 companies committed to the We Mean Business coalition are worth a collective $2tn and employ 4.2 million people 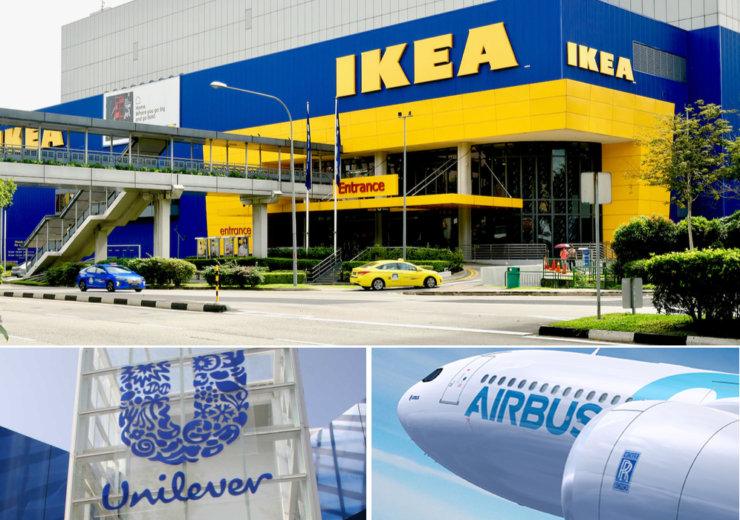 IKEA, Rolls-Royce and Unilever are among the businesses signed up to the We Mean Business coalition

From removing fossil fuels in the supply chain to electrifying lorry fleets, the We Means Business coalition has some radical ideas to curb companies’ emissions output — with IKEA, Rolls-Royce and Levi’s among the major backers.

What is the We Mean Business coalition?

Some 87 firms spanning roughly 30 industries and from across the globe have signed up to the scheme, which aims to encourage business leaders to tackle climate change.

The companies are collectively worth more than $2tn and represent around 4.2 million employees combined.

The coalition wants to help limit the global temperature rise to no more than 1.5C above pre-industrial levels — a target that was agreed at the 2015 Paris Agreement.

The international summit was followed by a landmark report by the UN Intergovernmental Panel on Climate Change (IPCC), which put forward that in order to avoid the heightened risk of floods, drought, extreme heat and poverty for millions, the goal must be reached by 2030 at the latest.

This then led to the launch of the We Mean Business coalition in June 2019, in which members of the group tacitly commit to adjusting their operations in order to limit the number of emissions they produce, subject to the 1.5C target as well as a bid to reach net-zero emissions by no later than 2050.

We take a look at the commitments that seven major companies within the coalition have made in order to hit those targets.

We Mean Business companies – including IKEA, Rolls-Royce and Levi’s

BT Group is a British multinational company and one of the world’s leading providers of communications services and solutions, serving customers in 180 countries.

The firm has committed to being a net-zero carbon emissions business by 2045, as well as cutting its greenhouse gas emissions intensity by 87% and reducing 29% of its supply chain emissions by 2030.

As part of its plan, BT is aiming to source 100% of its electricity worldwide from renewable sources by 2020.

It also hopes to convert many of its 29,000 vehicles, which range from cars to heavy goods vehicles, to electric vehicles.

BT’s head of environmental sustainability Gabrielle Giner said: “We know at BT that we need to introduce electric vehicles to our fleet, so when the government makes positive announcements about investing in electric vehicles – that’s really helpful for us.

“It’s the same thing about looking at the 1.5C scenario and what that would look like, so since we have a 1.5C degree target, policy-makers encouraging that is really helpful.”

Iconic Swedish brand IKEA is owned by the Ingka Group and is the world’s largest furniture supplier.

It has ambitions to become climate-positive across its supply chain by 2030 – by reducing greenhouse gas (GHG) emissions through working with partners, suppliers and customers around the world.

The group wants to reduce its direct and indirect GHG emissions from retail and other operations by 80% in time for 2030.

As part of the RE100 movement, a global group that brings together major businesses with the aim of accelerating a change towards 100% renewable electricity, IKEA is on course to achieve its target to generate more renewable energy than the total energy it consumes in its buildings by 2020.

To hit the targets set out by EV100, another business-focused initiative that aims to make EVs the norm by 2030, the company hopes to transition all last-mile home deliveries to EVs or other zero-emission transport by 2025.

To make that goal achievable, the Ingka Group plans to provide access to charging stations at IKEA stores, offices and distribution centres in 30 markets by 2020.

The furniture distributor is also striving to use 100% renewable energy throughout the entire IKEA supply chain by 2030, as well as phasing out all coal and oil-based fuels used on-site in production by 2025 and single-use plastic from its entire range by 2020.

In a statement, the IKEA Foundation said: “Everyone has a role to play when it comes to fighting climate change. That is why we believe in standing up and paving the way for unprecedented collaboration.

“There is no one solution for climate change, but a wide variety that will help make a liveable planet for many people.”

National Grid is one of the world’s largest investor-owned energy companies, distributing electricity and gas across the UK and the north-east of the US.

It has set goals for 2020 of increasing the energy efficiency of its UK property portfolio by 10%; reducing the capital carbon of its major UK construction projects by 50%; increasing the energy efficiency of selected US property sites by 20%; and reusing or recycling all recovered assets and sending zero office waste to landfill at selected sites.

The energy supplier also plans to set an internal carbon price on major capital construction projects and to report any changes in climate information that it discovers.

National Grid corporate strategy lead Courtney Eichhorst said: “It’s important for companies like National Grid to focus on climate action because corporations have a real opportunity to drive change, and they can help to influence policy and make the investments that will help facilitate the transition to a clean energy economy.”

The goods provider is committed to switching to 100% renewable electricity by 2030 in line with RE100, as well as accelerating the transition to EVs with EV100 and other initiatives.

In Unilever’s 2018 annual report, it said: “We are taking action across our value chain to reduce, reuse, recycle and recover post-consumer waste and move towards a more circular model.

“Our manufacturing operations have seen a reduction in total waste disposed to landfill, or incineration without energy recovery, of around 97% per tonne of production since 2008.”

The Tata Group is one of India’s largest companies, employing over 700,000 people across a wide variety of sectors including steel, power, automobiles, chemicals, hospitality, consumer businesses, and information and communication technology.

The group has set out separate targets across its portfolio, with Tata Power looking to achieve 40% of its power generation through non-fossil sources by 2025.

Elsewhere, Tata Chemicals has a goal of making a 20% reduction in the carbon intensity of all its products by 2020.

Tata Housing aims to reduce its carbon emissions year-on-year by 10%, with Tata Communication challenging itself to be carbon-neutral by 2022, including sourcing 100% renewable energy.

Meanwhile, the group’s holding company Tata Sons Limited has committed to improving its water security, as well as reporting any climate change information.

“Climate change is a complex phenomenon and it can be tackled only by taking a multi-disciplinary, collaborative approach.

“On the responsible advocacy front, Tata companies have been actively engaged with various organisations to help shape the discourse towards greater climate action.”

Rolls-Royce is one of the world’s biggest industrial technology companies and makes engines for civil aerospace, defence, land and sea, as well as operating in the nuclear power sector.

The company have ambitious targets to reduce GHG emissions associated with its operations and facilities to net-zero by 2030, securing an early success ahead of the Paris Agreement’s 2050 target.

It has been one of seven aerospace manufacturers to make a public commitment to sharing approaches that will drive the sustainability of aviation and reach targets set by the Air Transport Action Group (ATAG) to reduce net CO2 emissions from aviation to 2005 levels by 2050; and to limit the growth of net CO2 emissions by 2020.

Rolls-Royce is also part of the Advisory Council for Aviation Research (ACARE), which has committed to reducing new aircraft CO2 emissions by 75% and nitrogen oxide emissions by 90% per passenger kilometre by 2050.

To put this into context, a Boeing 747 jet airliner could travel more than 75 million passenger kilometres per month.

On the Rolls-Royce online sustainability page, it says: “We have an irrefutable role to play in addressing the risks and opportunities associated with climate change.

“Our technology will play a fundamental role in enabling the transition to a low-carbon global economy.

“We have a long-standing commitment to reduce the environmental impact of our products, services and manufacturing activities.”

Levi Strauss & Co is one of the most recognisable names in fashion, with its Levi’s jeans an iconic brand across the world.

Its targets include reducing all direct and indirect emissions by 90% in owned and operated facilities by 2025 and by 40% across its entire global supply chain in the same time frame.

In addition to that, the clothing brand aims to be using 100% renewable electricity in its facilities by 2025.

Levi Strauss & Co’s vice-president of sustainability Michael Kobori said: “At Levi’s, what the business needs from policy-makers is incentivising investments in energy efficiency and renewable energy.

“And make renewables a level playing field with fossil fuels, in order to allow the business to invest.”