Panasonic has been operating for over 100 years and has over 270,000 members of staff across the globe 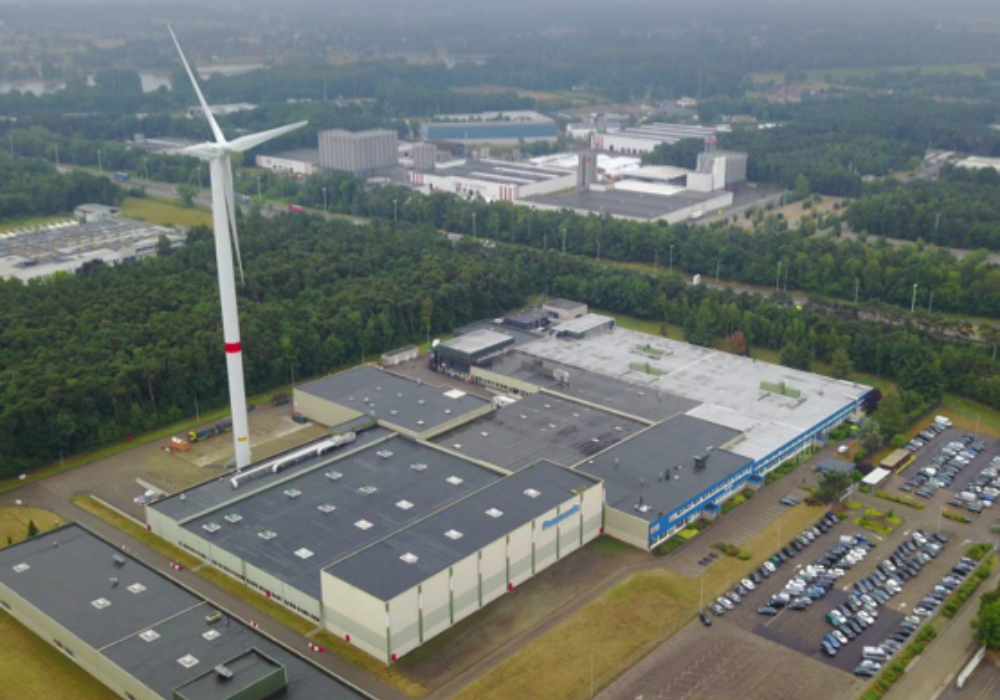 Panasonic is working to decarbonise society through its transition to zero CO2 emissions factories (Credit: Panasonic)

From supplying new “smart towns” with renewable energy to developing the next generation of batteries for electric vehicles, Panasonic is aiming to become the next green business of the future.

While more commonly known for producing TVs and cameras, the Japanese multinational is in the middle of a transition towards sustainability in products it sells to businesses.

It has introduced a target of reaching net-zero emissions on its business activities and products by 2050, as it looks to help decarbonise the world economy.

Panasonic Europe’s chairman and CEO Junichi Suzuki says: “As a company, we always have to target better sales with better profit, but fundamentally, the philosophy of our company is to exist and contribute to society.

“Otherwise, it makes no sense to continue. Therefore, for any activity that we do, it has to somehow be contributing to the improvement of society in each country or region we operate in.”

Panasonic, headquartered in Osaka, Japan, has been operating for more than 100 years and has over 270,000 members of staff across the globe.

It operates more than 500 subsidiaries and almost 100 associated companies worldwide, across a number of sectors, including electronic devices, home appliances and automotive – with a capital stock of 259bn Japanese yen ($2.37bn).

Suzuki sat down with NS Energy to explain how Panasonic is undergoing a renewable energy transformation – both in the products it manufactures and its own internal processes.

What is Panasonic doing to transition to renewable energy?

In 2017, Panasonic announced its Environment Vision 2050, where it set the targets to reduce greenhouse gas emissions in its business activities and products by 30% by 2030, compared with 2013 figures – and reach net zero by 2050.

It has also joined the RE100 initiative, which consists of a number of major companies around the world that have committed to moving to 100% renewable electricity.

The company’s sustainability model sets out a list of targets that will contribute to the environment.

These include improving its recycling policies by “conserving limited resources for the future”, reducing the quantity of new minerals used, and pursuing zero waste emissions by “reducing final disposal to an absolute minimum”.

Panasonic is working to develop water-saving products, as well as conserving water in its own production lines.

It is also aiming to reduce the impact of using chemical substances in manufacturing as they can pose a potential risk to customers and the environment.

And the company will seek to improve its biodiversity credentials by creating more products that contribute to conservation, promoting sustainable wood use and building more green areas at its sites.

The firm is using its heating and cooling business to contribute to its reduction in CO2 emissions.

Panasonic’s products in this sector include electric fans, air conditioning equipment and gas pipes that recover heat from buildings.

Suzuki says: “Our heating business is one example of how our own solutions and equipment are contributing to society and the decarbonisation of the environment.

“That is quite new in our history because we have previously been supplying any type of cooling equipment – but, in Europe, we are rapidly growing the business.

“We are looking to replace gas boilers with equipment that heats up using electricity, so we can contribute to the reduction of CO2.”

Panasonic is working on hydrogen technology to contribute to the depletion of fossil fuels – improving energy security and helping to combat global warming.

Hydrogen is regarded as a clean and highly efficient energy resource as its only byproduct from a chemical reaction with oxygen is water .

The company made household fuel cells commercially available in the Japanese market in 2009.

This product uses hydrogen extracted from utility gas to make electricity and hot water in homes.

Panasonic is now looking into a number of new initiatives where it can produce, store and use hydrogen in homes.

In one trial, it is using the solar hydrogen generation technology to produce hydrogen from water.

Additionally, under the assumption that a society where hydrogen is supplied to each home will be realised in the near future, the company wants to develop a pure hydrogen fuel cell that allows it to produce electricity directly from the gas – offering high efficiency and low cost.

As part of its initiative to accelerate the growth towards a hydrogen society, the firm is aiming to commercialise hydrogen fuel cell generators by around April 2021.

They will have a power generation output of five kilowatts (kW) and are expected to be used at hydrogen stations and commercial facilities.

Panasonic is also the top sponsor for the 2020 Tokyo Olympic Games, where hydrogen fuel cells are being used in the Olympic village.

Once the Olympics have ended, the athletes’ village will become its own green residential complex.

Panasonic Homes, which builds its own “smart” homes, has played a major part in the introduction of smart cities in Japan.

It played a leading role in building the Fujisawa sustainable “smart town”, which opened in 2014 and sits 31 miles away from Tokyo.

The company knocked down one of its factories to build the self-sufficient town, where up to 3,000 people live.

Panasonic claims that the houses achieve “virtually zero CO2 emissions”, with the use of its technologies.

The town was designed to maximise illumination by sunlight and to take advantage of the direction of the wind.

It pivots around a smart grid that connects every building to a central real-time energy network, with every house being supplied with solar panels for electricity generation which feed into the grid.

Panasonic has also played a part in the construction of the Tsunashima sustainable smart town in Japan, as well the smart city project in Berlin, Germany, in which a new connected residential district is set to launch next month.

The company has been making a “CO2 reducing landscape” for the Future Living Berlin initiative, with the use of its solar panels on roofs and its heat pumps, which have a connected battery system that buffers energy.

Panasonic’s automotive battery division is developing, manufacturing and selling battery cells – as well as customised modules and high voltage battery systems – for use in hybrid-electric, plug-in hybrid-electric and pure-electric vehicles.

It is working with automotive and energy firm Tesla at its gigafactory in Reno, Nevada, to aid the production of the US company’s electric vehicles.

“This will also contribute to the decarbonisation of society, so automotive, alongside household equipment, are two big pillars where we want to focus and grow our business.”

The company claims it is increasing its electric vehicle communications in China and is also in close contact with leading car manufacturing companies in Europe, to develop “efficient and environmentally-friendly applications for a clean, sustainable future”.