Micro hydropower and the water-energy-food nexus

The European-funded REDAWN project has been developed to highlight how micro hydropower could help improve energy efficiency in the water sector, and explores its role in the water-energy-food nexus 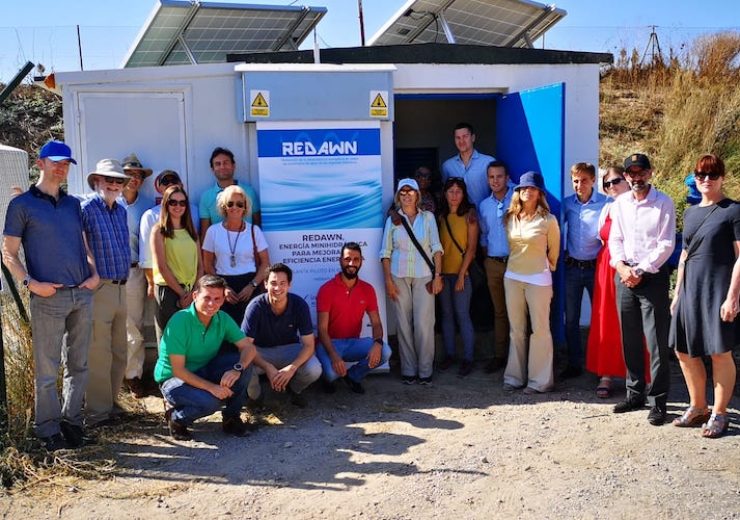 The REDAWN team at the demonstration plant on a farm in Andalusia, Spain. Image courtesy of the REDAWN project

Researchers Miguel Crespo Chacón and Kemi Adeyeye explain how the European-funded REDAWN project has been developed to explore the water-energy-food nexus, and to investigate how micro hydropower could help improve energy efficiency in the water sector.

The EU water sector utilises about 3.5% of the total energy demand. From the current global trend, energy use in the sector will almost double by 2040.

This makes the water sector a significant contributor to climate change, due to the fossil fuel sources used for the energy production.

The transition to renewable energy sources will help to alleviate this impact and achieve the Paris Agreement ambition of 40% reduction in greenhouse gases (GHG) by 2030.

Micro hydropower refers to a technique of using turbines situated within water channels or pipes to generate power of between 5kW and 100kW.

Its technical application takes advantage of the existing flow and excess pressure within the network to generate electricity.

Using this technology in pressurised water networks (drinking water, industry, irrigation or wastewater) could lead to important benefits, such as the improvement in energy efficiency, pressure and leakage management.

Social and economic benefits are also accruable such as reduction in operation and maintenance costs for providers on one hand, and reducing water and energy poverty especially in remotes areas on the other.

The REDAWN project and the water-energy-food nexus

The REDAWN project (Reducing the Energy Dependency in Atlantic Area Water Networks) is a project partially funded by the Interreg Atlantic Area programme through the European Regional Development Fund.

The project was born with the idea of recovering the existing excess pressure at key points in water networks, which is typically dissipated with devices, such as pressure-reducing valves.

The aim is to promote the use of micro hydropower with pumps-as-turbines (PAT) to produce renewable energy, thereby improving the energy efficiency of the water sector.

The project also seeks to understand the contextual, environmental and institutional opportunities and constraints to the uptake of micro hydropower in the EU’s Atlantic Area.

The technical basis of the REDAWN project is pumps working in reverse, or pump-as-turbines (PATs).

Compared to traditional turbines, PATS have been shown to be an attractive, cost-effective solution for small hydropower plants.

They have been found to be at least 10% cheaper than conventional micro hydropower turbines. They are also mass produced and readily available in the market.

PATs could be used to exploit the existing excess pressure in some points of the network and recover this energy for different purposes.

However, PATs have the disadvantages of a lower efficiency, which drop significantly with high flow fluctuations affecting to the power production.

Thus, control elements are often required to regulate their working conditions and we are also proposing solutions for this.

There have been several studies on how these conditions can be regulated and the most well-known approaches are the hydraulic and the electric regulation.

The hydraulic regulation is the most common approach, based on the control of the rotational speed of the device using variable speed drives, to adjust the speed to the conditions of the network.

Demonstration sites are very useful for showcasing innovation, providing the basis for comparison and to test and refine technologies.

The Spanish pilot plant within the pressurised irrigation network located in Andalusia was used during the entire 2019 irrigation season, supplying irrigation and fertilisation for about 300 hectares of farmland.

The plant consisted of a hybrid solution of two back-up solar panels of 600W, a 4kW PAT and a set of four batteries. The solar panels were never used as the micro hydropower plant completely replaced the previously used 7 kilo-volt-amperes (kVA) diesel generator.

Significant environmental, social and economic benefits have been achieved, completely avoiding greenhouse gases emissions and all the direct and indirect diesel generator costs.

This is in addition to branding, marketing and productivity value for the farm because of the renewable energy system.

Two sites are proposed in France – the first to be installed in SMPGA’s (Syndicate for the Production of Drinking Water in Granvillais) drinking water distribution network in Normandy.

The data and results obtained from this plant will be very interesting, due to the significant renewable energy opportunities in municipal water networks, including for pressure and leakage management.

The second installation is a free mobile phone charging point near a well-used bus stop to raise awareness of the technology and to highlight its multifaceted social benefits where facilities such as electric car charging points would otherwise be difficult or costly.

The demonstration for the process industry will be installed in a paper factory in Portugal.

Industries like dairy, alcohol, mining and paper utilise a lot of water during manufacturing processes and are always looking for ways to be both water and energy efficient.

The current supply infrastructure in this site consists on an open channel flow, which will be pressurised, and the water channelled through a 10kW PAT.

Green energy points are accruable by the company and the resulting energy will be reused on site.

The economic viability of most sectors – with direct links to jobs, livelihoods and wellbeing – necessitates efficient practices as well as the use of renewable energy sources.

Results so far are being disseminated in industry magazines and forums, scientific journals, international conferences and other important events, such as international technical fairs. A training course has also been organised, as well as  dedicated events and webinars with project partners.