The International Hydropower Association says countries like Colombia, Venezuela and Ecuador in the Andes subregion have installed hydropower capacity that exceeds two-thirds of the electricity share 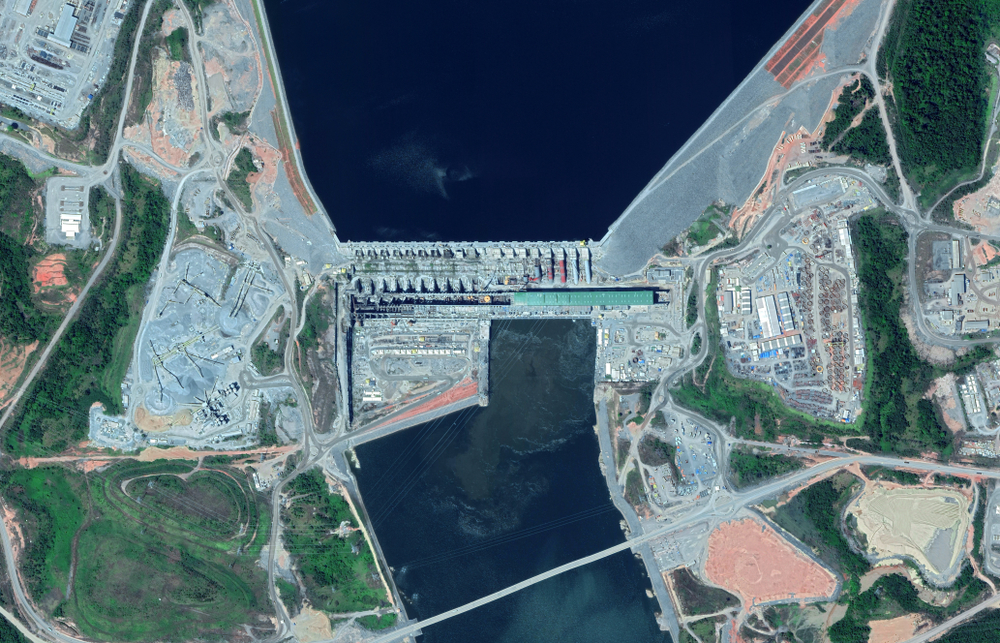 Hydropower currently dominates electricity generation in Latin America, with developments in the industry taking the technologies installed capacity to about 46% in the region. Here, International Water Power & Dam Construction (IWP&DC) tracks the most recent hydropower updates in Latin America.

Most notably, last year, Brazil surpassed China with the largest individual increase of installed hydropower capacity at 4919 megawatts (MW), mainly attributed to the completion of the 11,233MW Belo Monte hydropower plant. The largest hydro project in Brazil (excluding Itaipu Binational), and the fourth largest in the world, it will provide electricity to 60 million people.

The 350MW Baixo Iguacu plant was also inaugurated by Iberdrola in May 2019 and will provide power for more than one million people in Parana state.

Other developments in Brazil include Tractebel’s announcement in February 2020 that it is working on a 15 hectare floating photovoltaic plant on the Batalha hydroelectric power plant reservoir in Paracatu, Minas Gerais.

On behalf of Furnas Centrais Elétricas, Tractebel will develop the basic project for the implementation of Batalha Photovoltaic Plants (UFVs) I, II and III.

The objective is to reach a total installed power of 30MW. This will be achieved with about 90,900 photovoltaic modules being floated on the reservoir, and the balance of photovoltaic modules needed to meet the target will be developed on the ground, making use of what was once the construction site of Batalha hydro.

According to Maria Guilhermina Drummond, Superintendent of the Tractebel Energy Product Line in Latin America, the benefits of a floating photovoltaic solar plant are numerous: “This type of installation offers an efficiency gain in capturing solar energy, since, as they are close to the water, the modules remain cleaner and cooler – an essential factor for superior performance,” she explained.

“Floating modules installed on the otherwise unused reservoir of hydroelectric power plants for the generation of solar energy is a smart strategy when aiming for a zero-carbon future,” added Fabiane Ferrão, manager of the Renewable Business Unit.

“This unconventional project marks the beginning of our efforts in the niche of complex renewables in Brazil, complementing and adding to the floating solar experience Tractebel has been gaining in other countries since 2015.”

In May 2020, Andritz announced it is to perform the complete modernisation and digitalisation of the 1050MW Sobradinho hydropower plant on the São Francisco river in Brazil, after signing a contract valued after over €40m ($48m) with Companhia Hidrelétrica do São Francisco (CHESF).

Under the terms of the deal, Andritz will supply new electro-mechanical equipment, intake gates and – as an option – an overhaul of the six vertical Kaplan turbines.

Sobradinho has been in operation for more than 40 years. Installation of advanced digital automation and control equipment by Andritz will extend the lifetime of the plant and ensure safe and reliable operations in the future. The project is expected to be completed in 2025.

The Latin American region as a whole is moving towards a diversified renewable electricity mix. IHA says countries like Colombia, Venezuela and Ecuador in the Andes subregion have installed hydropower capacity that exceeds two-thirds of the electricity share.

Indeed, according to the International Renewable Energy Agency’s (IRENA) Coalition for Action Business and Investors Group, Colombia is a key player in the Latin America energy market.

“Rich with energy sources, it has one of the world’s cleanest electricity mixes, with hydropower currently accounting for 70% of electricity generation,” IRENA states.

“Plans call for boosting variable renewable energy (VRE) generation capacity to 17% by 2030, compared with less than 1% in 2017. This presents tremendous opportunities for solar and wind investment, as well as pumped hydro storage to enable VRE integration.”

The IRENA Coalition for Action Business and Investors Group brings together leading renewable energy businesses and investors – and says that it sees great potential for investments in Colombia.

Colombian utility group Empresas Publicas de Medellin (EPM) also announced on 15 September 2020, that it had received further payment from its insurance company, Mapfre, for the coverage of the contingency of the Ituango Hydroelectric Project. A second payment for $100m was added to the $150m paid in December 2019.

In 2018 heavy rainfall and landslides caused damage at the Ituango plant. An initial tunnel collapse caused by a landslide in late April was followed by another collapse on 7 May at the 2400MW project, which is currently under construction on the Cauca River and will generate 17% of Colombia’s electricity requirements.

After coping with the impact of COVID-19, EPM says the project is now “in full swing”, with nearly 3200 workers on site with the aim and commitment to start operating the first power generation units in 2022.

The work is currently concentrated on stabilising caverns and galleries; the intermediate discharge tunnel; stabilisation of the rock mass at the top of the spillway shafts; operation of the spillway gates; the electrical substation; road maintenance; and monitoring reservoir, dam and spillway behaviour.

EPM is reported to still be quantifying damages caused by the incident but it is expected to be one of the largest claims in the history of engineering.

In September 2020, the Salto Grande Mixed Technical Commission announced that it had awarded US technology and engineering company, Emerson, a contract to modernise operations at the binational Salto Grande Hydroelectric Complex.

The project is the first of a three-stage, 30-year, $960m investment to extend the life and improve the efficiency and safety of the 40-year-old complex located between Argentina and Uruguay.

Beyond supplying renewable energy to parts of Uruguay and Argentina, the 1890MW Salto Grande facility is integral to life in the region, regulating the flow of the Uruguay River, meeting the demand for drinking water supply and irrigation, preserving wildlife and ensuring the safety of local residents.

“This major effort will help safeguard plant operation that is critical for the interconnected power systems of Argentina and Uruguay,” said Bob Yeager, president of Emerson’s power & water solutions business. “Emerson welcomes the opportunity to help extend the life of the integral Salto Grande Complex for decades to come.”

The five-year contract calls for Emerson to modernise 14 hydroelectric turbine governors with its Ovation automation technology, designed to control and monitor hydropower operations.

The comprehensive solution includes measurement and machinery instrumentation for monitoring process conditions and will help provide reliable power generation that is highly responsive to the dynamic needs of the region’s electrical grid.

Looking further across the region, IHA says that, as part of government commitments to become self-sufficient in energy by 2040, several hydropower plants are expected to enter into operation in Peru over the coming years.

Across in Bolivia, the second plant of the 124MW San Jose Complex, the 69MW San Jose II, was inaugurated in June 2019. The next project in the pipeline is the 147MW Banda Azul hydropower plant.

During September 2020, Venezuela experienced further power cuts that served as a reminder of failures across the electricity system that caused a shut-down of public infrastructure, leaving millions of people across the country without electricity in 2019.

The outages were allegedly caused by cyber-attacks but opposition leaders claim a lack of investment in the national grid and poor maintenance of hydropower plants were behind the blackouts. With a total installed capacity of 15,393MW in 2019, Venezuela is ranked second behind Brazil in the region for total installed hydropower capacity.

The Mexican government is looking at increasing installed hydropower capacity through the upgrade of existing assets. CFE, the state-owned company, will focus on the modernisation of 18 existing hydropower plants, as well as the development of 14 new ones.

While the government of Haiti has promised to continue efforts to repair and modernise all hydropower stations after rehabilitating the country’s important 54MW Péligre plant.

In other developments, Guatemala commissioned the Renace IV, which will add the last 58MW of the 301MW Renace Hydroelectric Complex. The Dominican Republic is aiming to bring renewable electricity to rural communities through new small hydropower projects of less than 5MW.

While in Puerto Rico plans are underway to reactivate the 15MW Dos Bocas and 25MW Caonillas hydropower plants – both of which are more than 70 years old. Dos Bocas is operating with 6MW while Caonillas is not operational, due to loss of capacity caused by sedimentation.

In other news, a team of biologists led by Craig Albertson and PhD student Chaise Gilbert from the University of Massachusetts Amherst in the US, have recently reported about their research tracking shape changes in Amazon fish after the damming of a major river.

Working with colleagues at Brazil’s Museu Paraense EmílioGoeldi in Belém, and the Instituto Nacional de Pesquisas da Amazônia in Manaus, Albertson’s team tested the idea that fish could be expected to show changes in body shape.

This was a consequence of shifts in habitat and foraging behaviour, caused by dam construction which rapidly changed environmental conditions from a clear, flowing river to a deep, murky reservoir.

They compared museum collections of cichlid fishes gathered before a dam was closed in 1984 on the Tocantins River in the Amazon and contemporary specimens taken from the Tucuruí Reservoir by fishermen 34 years later.

Albertson explained that the team’s overarching hypothesis is that the damming of the Tocantins and subsequent formation of the Tucuruí reservoir has led to changes in the anatomy of resident cichlid populations that allow them to adapt to the novel environmental conditions.

The construction of the dam and reservoir may have even helped the success of local Cichla species as previous studies have noted their preference towards more stable water levels and sufficient littoral zones for reproduction.

Although the researchers say it is impossible to implicitly connect changes on the fish morphology to the construction of the Tucuruí dam, it has played an important role.