New ways to improve safety and health in the construction industry are constantly being developed in Europe, explains Jon Last 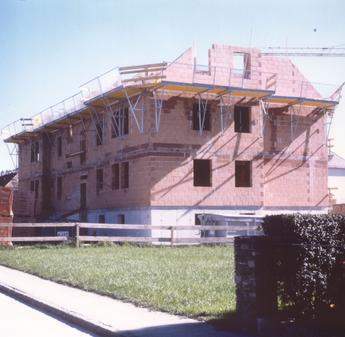 CONSTRUCTION is one of Europe’s largest industries, employing more than 12M people in the European Union (EU) alone, with an annual turnover in excess of US$1.2T. However, the construction sector has one of the worst occupational safety and health (OSH) records in the EU; indeed, workers in construction are twice as likely to suffer from non-fatal accidents than those in any other industry.

According to Eurostat, the statistical office of the European communities, around 1200 construction workers are killed each year. Incidences of musculoskeletal disorders are significantly higher than the EU average, with almost half of workers reporting back ache (EU average is 33%) and 36% claiming muscular problems in the neck and shoulders (EU average is 23%). Over half a million European workers are exposed daily to asbestos fibres, which can cause fatal diseases like mesothelioma and asbestosis, and many others work with oil resins and cement-based products containing Chromium VI, which can cause skin problems and occupational dermatitis.

A poor OSH level affects productivity and brings with it a huge financial loss: it is estimated to cost the construction industry US$99.5B each year. In 2001, over 800,000 construction workers suffered accidents that led to at least three days off work – which amounts to a staggering amount of lost working hours.

The construction industry was the focus of 2004’s fifth annual European Week for Safety and Health at Work. The event ran from 18-22 October as part of the European Agency for Safety and Health at Work’s Building in Safety campaign. Included in the week were several examples of good practice for reducing OSH risks in construction work, solutions conjured up by members of the EU-15 states following a criteria to: seek to tackle risks at their source; improve on currently hazardous situations; be sustainable over time; provide good consultation between management and the workforce; comply with relevant legal requirements and ideally be transferable to other work places.

The practices ranged from the simple to the elaborate, but each impressed the judges with a sound focus on improving OSH. Amongst others were measures in Germany to reduce exposure to hazardous gases using ‘zeolites’ to lower the temperature of asphalt and cut the dangerous fumes by up to 50%, and efforts in Lithuania to implement an effective health and safety plan right from the tender stage of a contract. Three other developments are detailed below.

Being aware of potential problems before they happen is a crucial way of preventing accidents. Ideally, workers’ safety practices should be monitored and the information used to improve and adjust protocol, but in reality this does not often happen. Monitoring safety on construction sites is especially difficult given that they are not permanent work environments. Typically a site will be up for only one year, and will have on average only 20 workers, so any figures based on accidents are often elusive. Many sites have no accidents at all, but this does not necessarily mean that they are safer than a site that did experience accidents; the scale of time and the level of monitoring are not comprehensive enough to form a viable conclusion.

The construction sector in Finland was commended during the Safety and Health week for its pioneering monitoring techniques and ‘Going safely in the 21st century’ competition. The Occupational Safety and Health Inspectorate of Uusimaa, in cooperation with the Finnish Institute of Occupational Health, has developed a tool for monitoring safety practices that is simple enough to be picked up and used on-site without being intrusive or overly complex – the ‘TR’ method. A means of calculating a working environment’s overall risk factor, it gained wide recognition in 1997 when, along with the ‘MVR’ method which was developed for the engineering industry, it was used as part of a three-year competition between companies, and its success led to a second three-year implementation in 2001.

The ‘TR’ method takes note of areas such as preventing the risk of falling; scaffolding safety; lifting safety; the instruction of employees; controlling dust and dangerous substances in construction work and, in the most recent competition, risk management at multicontractor sites. Work places were judged then marked as either ‘correct’ or ‘incorrect’ in each area. This information was turned into a percentage to give the workplace its ‘risk level index’ figure.

The ‘TR’ method competition was applauded for pioneering a radical safety-orientated approach to work and, by introducing an edge of competitiveness between companies, providing an acute incentive for workplaces to concentrate on their safety. The competition has seen OSH on sites dramatically improve – safety levels have risen significantly from 65% to 82%. Scientific study on the ‘TR’ method concluded that the competing companies now have as many as 500 fewer accidents per year.

Scaffolding is the cause of many accidents on sites, most of these in the first stages of its erection due to unsafe conditions. Traditionally, workers have to assemble (and dismantle) the scaffold components by hand in the place where the scaffolding is going up – normally at a great height. Often scaffolding is made all the more dangerous by being structurally unsafe and not complying with regulations: the planks or boards can be too short or too long, badly damaged or not secured properly, or the entire structure can be poorly supported and consequently at risk from collapsing.

The feeling amongst construction firms was that some form of ready assembled scaffolding would be the ideal solution. Such an idea would have to adhere to certain criteria – it would need to be flexible to bridge gaps and adapt to various building shapes, consist of few parts, include guard rails for safety, sustain a reasonable load (300kg/m2), and be easily assembled and taken apart.

One company took this idea and turned it into an award-winning product. Austria-based Doka took home the ‘Good Practice Award’ at the European Safety and Health week for its bracket Platform M, scaffolding that is made up from ready-assembled platform decking and brackets. Each section is lifted via a crane and then either hung over the top of the wall, or placed securely into existing masonry. Dismantling is achieved by reversing the process. This type of scaffolding does away entirely with all the unsafe manipulating of loose brackets and boards that is unavoidable when these have to be mounted separately in exposed locations – which is mostly a very laborious business, as well as being a great risk to safety.

The new design has proved to be a success, with sites that have implemented it reporting fewer accidents.

Another development that has received recognition is The Silent Book – a training and awareness manual that illustrates safe working practice, designed by NCC Construction Sverige, Sweden, the largest
company within the NCC group. The hazards of the workplace are displayed in cartoon pictures and often feature NCC’s cartoon
character, Trygge, showing the right and wrong way to behave in situations such as using equipment and manoeuvring around the workplace. Scenarios in the book are partly based on the issues NCC’s accident statistics and records indicated needed particular attention.

The major advantage with the book’s entirely pictorial nature is that it does not require translating. As such it is finding international success: the International Federation of Building and Wood Workers (IFBWW) were one interested party, requesting 1000 copies.

Staff feedback about the Silent Book has been positive; its easy to understand and accessible approach has been praised and its use promotes stimulating discussions about tackling the every day hazards at work. NCC’s work-related accident rate has declined over the last ten years, and its central health unit believe the Silent Book has had a major part to play in this.

Safety and health at work is an ongoing issue that needs to be constantly monitored and addressed if any improvement is to be made. The European Agency for Safety and Health at Work outlined a set of ingredients that should be followed in order to create safer, less hazardous and more efficient working environments.

• ï„·Ensure safety and health is a priority when buying products and services – don’t just award contracts on the basis of the lowest priced tender. Investing in a contractor with a good focus on safety and health will ultimately be more profitable.

• ï„·Before construction, the designer and the constructor should work closely to plan the project in a way that will take risks into account.

• ï„·Focus on staff training and involve all levels of staff in the OSH process. Knowledge provides confidence and will yield a safer and better performance.

• ï„·Assess the risks, conduct a thorough examination of the potential hazards and ensure enough precautions are being taken to protect workers. Monitor the risks regularly.

• ï„·Establish systems and procedures to make sure everyone is working towards the highest possible OSH standards.

• ï„·When the project is finished, evaluate the OSH performance and learn from mistakes and achievements.

It is hoped that by being aware of risks and putting safety and health as a top priority, the number of accidents can be reduced.