Pipeline buckling: time to straighten up

With E&P activities moving into deeper waters and harsher onshore environments, oil and gas pipelines are under strain. Despite the best-laid plans, pipeline buckling caused by changes in temperature and pressure can often occur. Peter Don Bosco, Petrofac’s project manager, explains how the effects of buckling can be mitigated or prevented altogether. 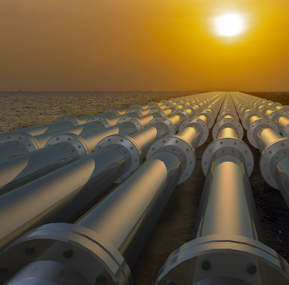 Upheaval and lateral buckling are inherent problems for offshore pipelines where impact must be considered from the initial planning and engineering phases. Onshore lines operating at higher temperatures and different pressures can also experience incidents of lateral and vertical buckling, especially where the pipeline is installed through environments of rolling desert and swampy soils with poor soil cohesion.

The buckling of onshore pipelines can be global and local in nature. Local buckling is mostly confined to specific places on the pipe, whereas global buckling affects entire sections along the pipeline.

"Local buckling is mostly confined to specific places on the pipe, whereas global buckling affects entire sections along the pipeline."

Internal pipeline pressure and temperature often reach higher values during start-up operations than those prevalent during installation/backfilling of the line. Such an increase in temperature and pressure can cause the buried, restrained or partially restrained pipeline to expand during the start-up and operation cycles.

This restraint against the expansion of the pipe generates axial compression within the pipe section, which can upset the existing equilibrium of the opposing forces. When the axial compressive force exceeds the soil-pipe frictional force, the excess energy will move the pipe through a path of least resistance until a new equilibrium is attained. This movement could either be lateral buckling or upheaval buckling (UHB), while the solid ground below restricts downward movement. The main factors contributing to the UHB of onshore pipelines are:

The main factors in resisting UHB are:

What can be done at the design and planning stages to minimise the risk of UHB? Pipelines should be designed buckle-resistant for the most severe coincident conditions of pressure and temperature, which may occur during start-up and normal operation of the pipelines.

"Pipelines should be designed buckle-resistant for the most severe coincident conditions of pressure and temperature."

The approach at the design and planning stage should, therefore, be to develop a system that incorporates measures to optimise the upheaval buckling driving and resisting forces in a cost-effective manner.

In consideration of the above criteria, lines could be shortlisted in order to focus on obtaining input data specific to buckling-related aspects. The critical areas/sections may be identified for further evaluation while acquiring topographical/geotechnical data. To optimise UHB driving and resisting forces, the following issues must be considered:

There are also technological innovations that can help to overcome UHB. Because UHB is closely allied with offshore pipelines, the technological innovations on the mitigation measures are more prevalent in the offshore industry. Some innovative techniques can be transferred to onshore pipelines in order to overcome potential UHB issues. These include:

Once laid, the following inspection and measurement techniques allow UHB to be monitored:

A unified approach in the R&D of UHB prevention and mitigation techniques seems inadequate within today’s onshore pipeline industry; however, a number of individuals and organisations have been performing research in developing methods to assess UHB risks quantitatively.

Though a convergence in the identification and quantification of the upheaval driving forces has emerged, there is a varied approach on the establishment of the upheaval resistance forces and its quantification. The pipe and the soil together form the engineered system where the pipe-soil interaction results from the nonlinear (elastic-plastic) soil spring behaviour.

Based on theoretical soil mechanics and laboratory/field investigations, calculations have been developed for arriving at design factors for resistance related to the soil types. Recently, some pipeline operators have started specifying the requirements for UHB analysis and the implementation of mitigation measures; however, given the variety of environments in which pipelines are laid, is it possible to completely eradicate the risk of UHB?

"The key to implementing viable mitigation measures against upheaval risk lies with the availability of data on the variety of environments in which pipelines are laid."

The key to implementing viable mitigation measures against upheaval risk lies with the availability of data on the variety of environments in which pipelines are laid. Prudent detailed engineering, based on reliable topographic and geotechnical survey input, followed by quality installation work can significantly exclude the risk of upheaval buckling of a pipeline.

While engineers can calculate the uplifting forces fairly accurately by taking into consideration the longitudinal profile of the pipeline, determination of available downward resistance forces along the pipeline route passing through terrain with varying geophysical conditions remains tedious. In the absence of location-specific topographic and geotechnical data, engineers adopt more conservative input data for such calculations.

Risks may increase in the future as E&P gradually moves to harsher environments. Harsher areas of undulating and unstable terrain with non-cohesive soil will, by definition, be more prone to upheaval buckling. While UHB risks could be assessed reasonably well based on field data obtained through the latest survey techniques, the cost of implementing the measures to mitigate such risks would tend to be high. Reliable and more location-specific terrain and soil data should always be acquired.

Software programmes for pipeline stress analysis also need to be more flexible. This would allow for the incorporation of such input data in order to assess the upheaval buckling accurately and thereby develop cost-effective mitigation measures.