Is your generator fit for cyclic duty? 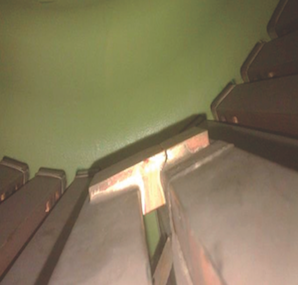 Although many generators have been theoretically designed to cope with a typical standard of 10 000 starts, few reach that threshold before major component failure occurs. Many units show crack initiation in some components within as few as 200 to 300 starts, with failures in the 500 to 700 start range.

If a unit is going to be moved from baseload to cycling operation, the generator rotor should be inspected, tested and, if necessary, modified to make it better suited for long-term cyclic duty. These modifications can be usefully done even after the plant has adopted the new operating regime. Recently, National Electric Coil (NEC) was asked to repair and modify two generator rotors in plants that changed from baseload to cyclic duty some time ago, which subsequently experienced forced outages. Neither failure manifested itself immediately after the change to cyclic mode operation, but instead both failures occurred several years later.

Among generator rotor components vulnerable to low cycle fatigue are: pole-to-pole crossovers (aka pole-to-pole connectors or pole- to-pole crossover connectors); J-straps/main leads/terminal studs; radial leads/studs; tooth tops/dovetails; slot wedges; and rotor bores. It is important to note that these areas of the generator rotor can be inspected and even repaired without needing a full rewind in most cases.

There are many different varieties of pole-to-pole crossover design, but all serve the same purpose. Some crossovers are positioned axially on the inner diameter of the winding, some on the outer diameter, while some are radially oriented, nested in between the two outermost coils. Some designs are less flexible than other designs and many of the less flexible, stiff crossovers crack prematurely.

Figures 1 and 2 show less flexible pole-to-pole crossovers. This type of crossover is particularly prone to premature cracking due to cyclic fatigue from start–stop operation.

Most flexible designs, with multiple copper leaves, are reliable. Many of these flexible designs are in the shape of the Greek letter, omega (Ω). The omega design provides ample flexibility to accommodate the radial and tangential displacement of the two sets of rotor coils as the unit comes up to rated speed. Examples of two different flexible pole-to-pole crossovers are shown in Figures 3 and 4. That shown in Figure 3 is orientated radially, while that in Figure 4 is orientated axially, but note that both have the same omega style shape.

All pole-to-pole crossovers should be inspected for cracking, especially as speed cycles start to accumulate or prior to or shortly after the generator operation mode is changed to a more cyclic regime, eg peaking.

However, even flexible pole-to-pole crossover connections can crack if the rotor sees sufficient starts, as Figure 5 testifies. On some less flexible designs, crack initiation in the pole crossover can begin in as few as 300 starts, with documented failures in the 500 to 1000 starts range for some designs. An in-service failure of a pole crossover often causes an open circuit condition, with the unit forced off-line. In some cases, additional damage to the copper winding, rotor shaft forging or the retaining ring can occur.

Some crossovers can be replaced with an upgraded design with the rotor still in the stator. Others require the rotor to be removed and the connection-end retaining ring to be removed. Some designs allow a second, redundant, crossover to be installed, which is a prudent measure when the opportunity arises.

Stiff pole-to-pole crossovers should be identified and replaced early, before an open circuit failure occurs. A change to an omega style crossover will provide years of trouble free cyclic operation. Most crossovers can be inspected via borescope with the retaining rings still in place and even with the rotor still in the stator.

Many of the same issues and principles that arise for the pole-to- pole crossover are also relevant for J-strap/main lead/terminal stud assemblies. These components have varying names and configurations, but serve the same purpose, to provide a path for current to flow from the collector rings or exciter to the first coil of the main field winding, and then back again.

The designs come in many shapes and sizes, depending upon the manufacturer and the type of generator, but all have an inherent weakness in that their shape transitions from a small diameter (same as the outboard shaft) to a larger diameter at the main field winding. This vertical transition of the component from smaller diameter to larger diameter must accommodate significant radial and tangential displacement due to rotation and thermal expansion. Some designs attempt to accommodate this radial displacement with a smooth curve (the “J” shape), and some with a straight radial run (radial lead). Some designs use a stiff, thick, non-laminated piece of copper of rectangular cross section, while others use flexible, thin, multiple layers of copper laminations. Some incorporate both a stiff, rigid section and a flexible section.

Examples of typical terminal stud designs and J-strap designs are shown in Figures 6 and 7.

Because of the significant radial displacement that occurs with each speed cycle (0 rpm, to rated speed, then back to 0 rpm), these designs can be prone to premature fatigue cracking and failure, causing an open circuit condition.

Figures 8a and 8b show photographs of terminal stud failures, while Figure 9 shows fatigue cracking in a main lead J-strap.

In general, it has been found that these components are best left flexible, but even flexible designs have pitfalls – one of which (shown in Figure 9) is allowing braze material to wick up into the flexible portion of the lead, changing a flexible design back into a stiff design and making it prone to premature fatigue cracking.

Most rigid and stiff components can be made more flexible. This can be done by using an increased number of copper laminations that are thinner than the original. If a single solid strap is involved, it can be replaced with multiple, laminated thinner layers of copper.

In addition, flexibility loops, to accommodate these relatively large radial displacements, are essential for speed-cycling operation. Figure 10 shows a cracked J-strap, as well as a J-strap of improved design, with a flexibility loop.

Most J-strap designs with thin, multiple, copper laminations have sufficient margin to allow failure of the first or even the second lamination. Cracking and separation of that first or second lamination can sometimes be detected via borescope with the rotor still in the stator. Immediate shut down may not be necessary.

Replacement of the J-strap with one of improved design, better able to handle start-stop operation, often requires removal of both No. 1 coils. However, a full rewind, in most cases, is not required. The J-strap should be high on the list of components to be inspected and evaluated when a unit is slated for increased cyclic duty.

Radial leads should be inspected as part of the effort to prepare any rotor for cyclic operation. They are a highly stressed component that is subject to low cycle fatigue cracking with repeated starts. Leads should be removed, cleaned and dye penetrant tested for cracks. Cracks are sometimes found in the thread undercut area. Replacement of the radial stud (with one of similar or improved material) should be considered since significant fatigue damage may have occurred to this component over the years, although cracking may not have been initiated.

Although rotor tooth top cracking (occurring at the ends of the rotor body underneath the retaining ring shrink fit) has never been known to cause a forced outage, inspection and repairs at the onset of a change to cyclic duty operation are well advised.

Cracking of rotor tooth tops (Figures 11 and 12) is directly influenced by the number of starts, and can be detected by eddy current testing. In many cases, finite element analysis can be done to ensure that tooth top and retaining ring modifications will allow daily cycling with no future crack initiation. Increasing the fillet radii in the tooth top and tapering of the retaining ring fit can often enable the rotor to be fully capable of a full 10 000 future starts. This upgrade can be done with the field winding still in place.

Likewise, dovetail cracking (occurring away from the rotor body ends, not under the shrink fit, but at the slot wedge interfaces) can also be checked with the field winding in place.

Eddy current testing of the slot dovetails can be done with the slot wedges removed. Repairs to dovetail cracks are possible, as long as the cracks are shallow, even with the field winding still in place.

It may appear odd that these generator components are lumped together, but they are similar in that these are components that are easily inspected without the need for a rewind. They are also similar in the sense that liberation of a single wedge or a single fan blade, due to a propagating crack, has the potential for complete machine destruction.

Inspection of these components should not be neglected prior to or shortly after a change to cyclic operation, but it is rare that a specific upgrade would be implemented on these components, unless a known design defect is present. In those cases, increasing of the slot wedge fillet radius may be required, or perhaps a change of material.

A rotor bore examination should be considered for rotors manufactured before about 1960, with full length bores. Rotor shafts forged prior to 1960, typically did not use vacuum degassing techniques. This makes these older shafts more susceptible to inclusions and voids, which could lead to cracking with extensive start–stop operation. Visual inspection of the bore inner diameter surface, a magnetic particle inspection for cracks on this same surface, and an ultrasonic examination of the rotor interior should be done prior to, or shortly after, a change to cyclic operation. Like all the other key component areas discussed above, a rotor bore examination is non-intrusive in that a rotor rewind is not required. There is no upgrade in this area, like some of the other components, but there are repairs such as honing, polishing and local grinding that may aid in crack identification and crack removal, preventing a serious catastrophe should a rotor burst occur.

Figure 14 shows rotor bore indication, as seen through a borescope.

A thorough inspection should be done on any rotor that undergoes a change from baseload operation or even load following, to frequent speed cycling operation. Speed cycling, and the rapid increase in the number of starts, can quickly fail components that are susceptible to low cycle fatigue. The inspection ideally should be done before this operational change is made, but in many instances, can be done after, eg, at the next major rotor out outage. It should be done within five years, but this depends on the number of starts per year and the unit’s previous history of starts. If the generator has amassed less than 500 starts in its lifetime, inspection should be planned for the 500 start mark or shortly thereafter. The number of starts is a key indicator of these types of component failure, and all units should have this number tracked on a continuous basis.

Although a full rewind may be contemplated to prepare for cyclic service, in many cases, if the winding tests acceptably, it is not necessary. Also, units that speed cycle may not run many hours and operate in peaking mode only, so investing significantly in a full rewind may be difficult to justify. However, to proceed with reliable, long term, cyclic operation, it is advisable to assess key components that are particularly susceptible to damage arising from frequent starts and stops, notably pole-to-pole crossovers and J-straps/terminal studs.