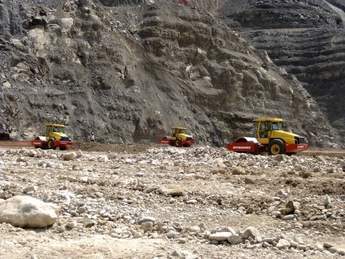 The Alkumru Dam and hydroelectric power plant is located on the Botan Creek within the boundaries of the city of Siirt in Turkey’s Southeastern Anatolia Region. The US$500M project, which currently employs a total workforce of some 1250 people, is being undertaken by Limak HES Yatirimlari AS.

The dam is one of seven adjacent dams to be constructed on Botan Brook, a tributary of the River Dicle, and is expected to be completed at the end of 2010. As part of the project, a total of 18Mm3 of clay and rockfill is being compacted to form a finished structure with a height of 134m from foundation level and a crest length of 909m.

Since the project commenced in 2007, Sweden-based Dynapac, part of the Atlas Copco Group, has supplied soil compaction equipment for the application but also provided the necessary follow-up expertise to ensure its correct and efficient use.

The rollers chosen for this project consist of three CA512D smooth drum machines and one CA512PD padfoot version, all with a drum width of 2130mm. The smooth drum units are being used for compacting layers of rockfill whilst the padfoot machine is working on the cohesive clay areas.

The machines are making three or four passes of up to 200m in length achieving the required 99% degree of compaction. The CA512 is powered by a Cummins turbo-charged engine developing 129 kW (173 hp) at 2200 rpm and has maximum operating weights of 17 and 17.2 tons in smooth and padfoot drum versions respectively.

Once completed, the Alkumru Dam and the power plant is planned to produce 828M kWh of electric power per annum with its 265MW installed capacity fulfilling part of the Turkish Government’s long-term plan to reduce the country’s dependence on foreign power.

The US Bureau of Reclamation has awarded Alpine Diversified an approximately US$2B construction contract for dam safety modifications at Dikes 4 and 6 at Folsom Reservoir in California.

As part of the USBR’s Safety of Dams (SOD) programme, modifications will be made to the two earthen embankments, which are located on the north shore of Folsom Reservoir. The SOD programme is an ongoing multi-year construction programme to perform required safety modifications at Folsom Dam and Reservoir in conjunction with the ongoing Joint Federal Project (JFP)

The principal work to be performed under this contract includes the partial removal of the downstream face of both dikes in order to add features such as filters and drains to control internal erosion. The filters and drains will be constructed of high-quality imported materials that will be obtained commercially and brought onsite via trucks; other local materials to be utilized in this project were stockpiled on site during previous work on Dike 5. After the work is completed, the contractor will place gravel surfacing on the crest of Dike 4 and asphaltic concrete pavement on the crest of Dike 6. The contractor will also construct a permanent, gravel-surfaced maintenance access road at the toe of the embankments.

This project will complete the majority of SOD construction work on the north shore of Folsom Reservoir, although minor follow-up activities such as site restoration will still occur.

Winds of change for dam design

The latest design from UK architect Laurie Chetwood has been inspired by the hydro industry and will replicate the work of a dam.

A wind dam is being erected at Lake Ladoga in the Pitkyaranta District of Russia. Chetwood, one of 20 architects at Chetwood Associates, is working with WSP Finland on the project. It will be capable of harnessing relatively minimal wind volumes at low speeds to generate power via a turbine. Upon completion predicted output will be in the region of 100-120MW/yr.

The wind dam is tethered between two land masses strategically located to harness the prevailing wind. Of a spinnaker shape, the dam is similar to the mainsail of a yacht. The funnelling effect of a gorge or narrow valley concentrates the mass of air which is captured by the sail and is diverted through a turbine, generating electricity.

FEM simulation, wind tunnel testing and vibration analysis are being carried out for a number of locations in Russia. For more details contact laurie.chetwood@chetwoods-london.com