Intakes of hydropower plants have always been equipped with trashracks to keep trash from the turbines. Cleaning initially had to be carried out by hand, requiring an enormous amount of staff to do this at larger plants. The begining of the 20th century saw the development of machinery for mechanical trashrack cleaning and finally resulted in the large, wire rope trashrack cleaners well known for their use at hydro plants on the Danube, Rhine and Parana rivers. Wolfgang Radhuber gives more information about the development of trashrack cleaning. 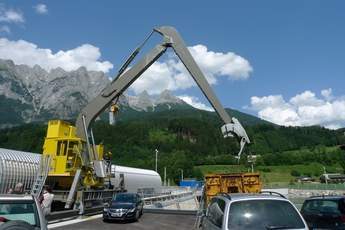 In the ancient world water wheels were designed so that coarse swimming debris could not reach the wheels. Little indication is given within the literature about trashracks or similar devices built to retain debris. Water wheels will keep functioning despite leaves and small debris but measures still had to be taken against coarse trash.

The first turbine was set into operation in about 1827. It produced 4.5kW at an efficiency of 80%. By 1838 the first Francis turbine, with a power of 170kW, was in operation [1]. Turbines have a much greater discharge than water wheels,but the through-flow sections of small turbines are far more sensitive to trash than water wheels. Thus the first turbine plants were already equipped with trashracks.

As long as trashracks have been in use, they have had to be cleaned. Traditionally they were cleaned with hand rakes. In the autumn, when the rivers were full of fallen leaves at Rheinfelden, Germany, up to 100 people were called upon for the task of trashrack cleaning. Even then, at the beginning of the 20th century, it was not easy to get so many people for such a short-time job.

The size and position of trashracks were influenced by the necessities of manual trashrack cleaning. The depth of water at the trashrack was limited to a maximum of 6m. The flow rate had to between 0.4-0.7m/sec (relative to the inclined height).

At a power and pumping plant erected in 1902 near Glüder, Solingen in Germany, a stationary trashrack cleaning machine was installed, primarily designed to remove leaves.

The trashrack was crossed upwards by a chain driven scraper. The collected trash was dumped onto a cross belt. Today, chain-driven trashrack cleaning machines of a modern design are still used at small hydropower plants.

Many solutions to the debris storage problem have been created. All the possibilities of the materials-handling technology can be used. Accessories such as timber grabbers or orange peel buckets may be mounted on cranes to remove large objects. Surface rakes that can be lowered are used to gather and drift floating debris.

This type, in the size discussed here, has only been manufactured for a few years. The revolving superstructure of the machine enables dropping of the trash besides or behind the railway of the trashrack cleaner. The trash is dropped in a concrete bin or a container to be disposed of later.

The grab rake can be rotated to conform to the position of a tree or other debris. Thus floating debris can be pushed to the weir to be drifted and large debris, such as trees, can be picked up by the grab rake and disposed of.

The cleaning length for hydraulic jib trashrack cleaners is limited by economical and architectural reasons to about 15-20m. Greater cleaning lengths require the use of telescopic beams with the result of complex design and enormous weight.

The hydraulic jib trashrack cleaner is an all-in-one machine. Separate crane and surface rakes are not necessary. The grab rake has to take over their functions. Size and additional features of the grab rake have to be specified before the design is made in order to be adjusted not only to the requirements of trashrack cleaning, but also to the additional functions. A good knowledge of the trash to be collected is basic. A low noise level is very difficult to achieve and requires great effort.

There is not enough experience available yet to determine the life span of hydraulic jib trashrack cleaning machines, since these machines, at least of the size discussed here, have been in operation for only a few years.

Operating expenses are substantially influenced by the required maintenance staff and depend also on the availability of the required machine. Today, programmable controls are used almost exclusively for both types of machines. The mechanical and hydraulic components of a wire rope trashrack cleaning machine are rather simple and therefore easy to maintain. Handling the sophisticated hydraulic controls necessary for hydraulic jib trashrack cleaners quite often requires the use of and consultation with external specialists.

The future of both types depends whether and how they fulfil the criteria of economic efficiency. Depending on evaluation criteria of the technical capacities, the required staff, the necessary availability (ie operational reliability) and last but not least the personal preferences of the decision maker, both types of machines can be installed. As soon as adequate experience is gained from the operation of hydraulic jib trashrack cleaners we will be able to determine which type of machine will be preferable.