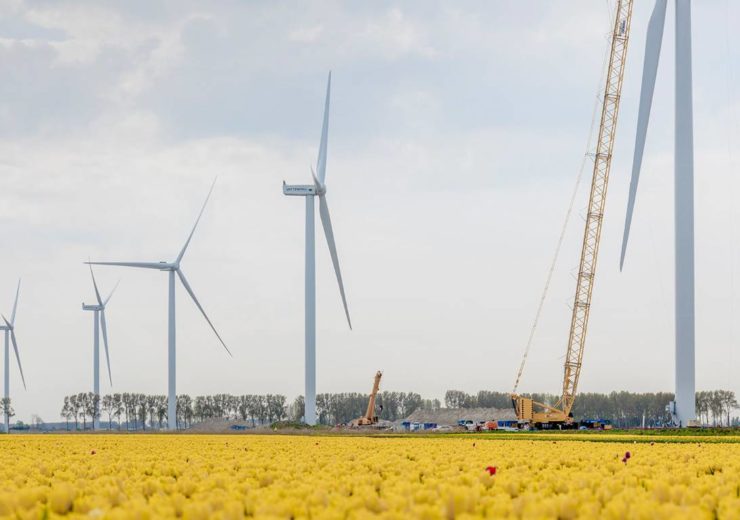 Swedish energy company Vattenfall has completed the installation of a total of six wind turbines at 60MW Haringvliet hybrid energy park in the Netherlands.

Located in Haringvliet in the Netherlands, the hybrid energy park will feature solar panels, wind turbines and batteries.

The facility will comprise six wind turbines, 124,000 solar panels and 12 shipping containers with batteries, which will be used for grid balancing purposes and will also serve as energy storage facility.

The hybrid energy park will be constructed with a total investment of €61m.

Haringvliet energy park site manager Leon de Graaf said: “Due to the coronavirus outbreak, our work was affected. For example, we are normally three or four colleagues working to connect the cables. Now we could only be two people working in order to keep the distance of 1.5 metres.

“In addition, we had a lot of bad weather last winter, with a lot of rain and wind. All of this has an impact on the planning.

“But luckily it went well in April and we were able to continue working quickly, and in the end construction delays were limited.”

Once operational in end of the year, the output generated by the hybrid energy park is equivalent to power 40,000 Dutch homes.

The first stage of the energy park involves installing a total of six wind turbines in the north of Goeree-Overflakkee island between Middelharnis and Stad aan ‘t Haringvliet.

The output generated by the wind farm is expected to be 22MW which is enough to power approximately 27,000 households.

The energy company will next install the 38MW photovoltaic array and the 12MWh battery storage system.

Recently, Vattenfall and transmission system operator (TSO) TenneT have signed an agreement to build an offshore grid connection for the 760MW Dutch offshore wind farms Hollandse Kust (Zuid) 3 and 4 to be located in the North Sea.