The 4.8GW nuclear power project, which is being executed under an intergovernmental agreement signed between Turkey and Russia, will have four VVER-1200 units, each having a capacity of 1.2GW, to collectively produce nearly 35 billion kWh of electricity per annum 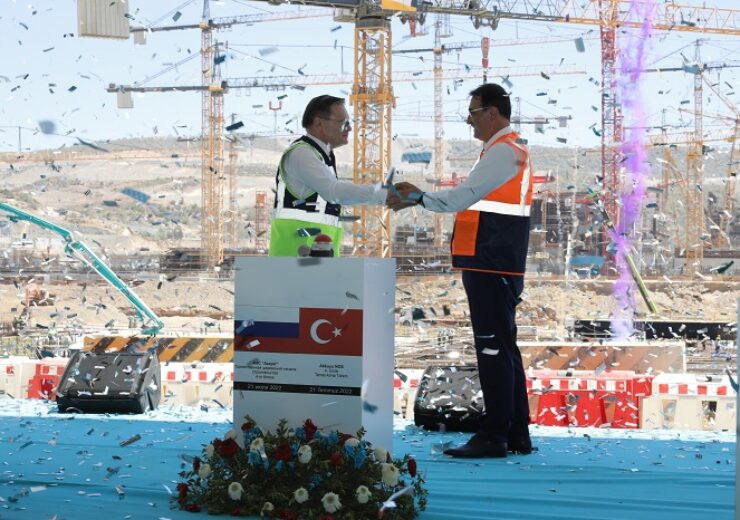 Turkey and Rosatom have broken ground on the fourth unit of the $20bn Akkuyu nuclear power plant (Akkuyu NPP) located on the southern coast of the country in Mersin province.

The 4.8GW nuclear power project is being executed under an intergovernmental agreement signed between Turkey and Russia in 2010. It will have four VVER-1200 units, each having a capacity of 1.2GW.

In October 2021, the Turkish Nuclear Regulatory Agency (NDK) issued the licence for the construction of the fourth power unit.

Akkuyu is the first nuclear power plant in Turkey to have reached the construction stage. The project is being executed by Akkuyu Nuclear, a joint stock company majority-owned by Rosatom on a build-own-operate (BOO) model.

Rosatom director general Alexey Likhachev said: “Akkuyu NPP is the flagship ROSATOM project outside of Russia. This is our largest project with construction taking place at four NPP units simultaneously.

“We see the colossal work accomplished at the construction of this nuclear power plant.”

Rosatom began construction on the first unit of the Akkuyu nuclear power plant in 2018. In June 2020, construction began on the second unit, while the third unit broke ground in March 2021.

The Russian nuclear power company said that construction work continues across all areas of the project, involving over 25,000 people.

Once fully operational, the Akkuyu nuclear power plant is expected to produce nearly 35 billion kWh of electricity per annum, which can meet almost 10% of the electricity requirements of Turkey.

The project will have an operational life of at least 60 years.

Turkish Energy and Natural Resources Minister Fatih Dönmez said: “Akkuyu will play an important role not just through the electricity generation, but also with its contribution to our green energy goal.