Is this the future of small hydro project financing?

A new financing mechanism is allowing companies to contribute to renewable energy production without having to take full responsibility for construction and long-term power purchase agreements. ASML is one such company which has helped facilitate the development of a hydropower plant in Norway. 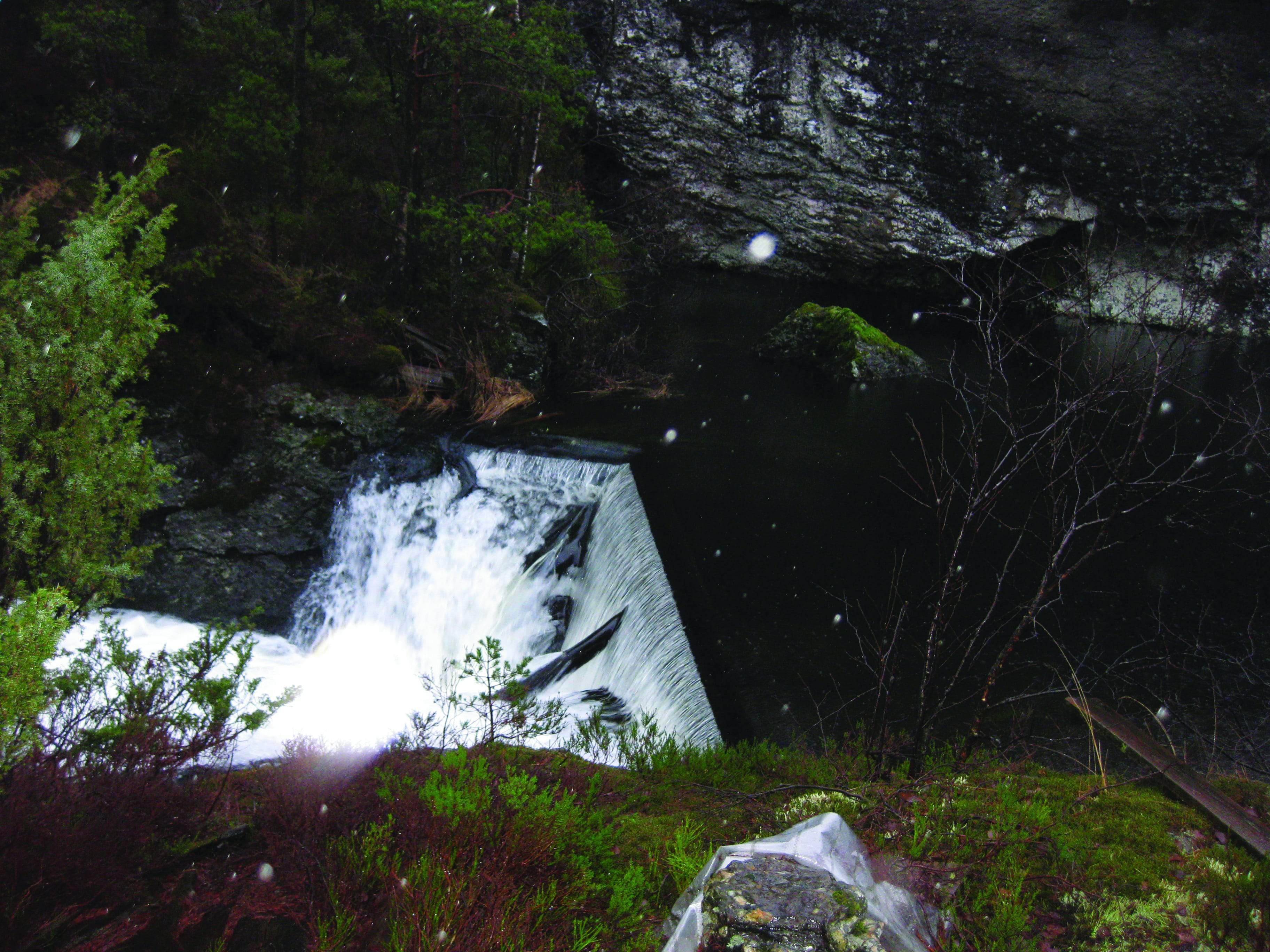 The Sandvik river in Norway, the power behind the the revitalised Sandvik Hydro Power Plant.

The Sandvik river flows amongst the farms and fjords in Western Norway. Just over 100 years ago, along with its 133m high waterfall, it provided the local community and neighbouring farms with power generation through the Sandvik run-of-river project – now it is a testbed for a new mechanism that could transform small hydropower project financing.

However, a cold period during 1942 caused the power plant to freeze. The turbine was destroyed and remained idle until recent activity brought the stalled scheme back into operation in the first quarter of 2018.

Egil Kambo from KAMBO Energi is the man and company behind the construction of the revitalised Sandvik Hydro Power Plant.

“The local community and landowners had been considering restarting Sandvik Hydro Power Plant for a while,” he explains. “We considered different options, including creating a shareholder company and attracting external investors, but we never found a way to realise it.”

It wasn’t until Kambo and his team connected with ECOHZ, a non-profit foundation that offers global renewable energy solutions to businesses, that they first understood Sandvik could be a source of power for the local community once again.

Kambo explains: “It started as a conversation with Knut Olav Tveit, the managing director of the Norwegian Small Scale Power Producers Association. He asked us about our plans for the future, and we told him that we had a project with the necessary permits, but it was lacking the final financing. He told us that ECOHZ had a product dedicated to realising renewable energy projects like ours. We were then introduced and have cooperated ever since.”

Norway is described as being full of ideal locations for small hydropower plants, with hundreds of them having the necessary permits in place and ready to be built. However, many of them fall at the last hurdle as they lack the final financing necessary to initiate construction. This is where ECOHZ GO2 comes into action. It is a high impact renewable energy product that combines the purchase of documented renewable power with financing and building of new renewable power capacity.

“Small scale hydropower plants need to be increasingly cost efficient to make financial sense,” Kambo says. “This means that financing is more difficult to come by. Products like GO2 are therefore quite important if Norway is to realise the 3-400 hydropower projects that have permits but lack final financing.”

It was another European corporation, this time Dutch technology company ASML, that helped to facilitate the construction of the new Sandvik plant. ASML, the world’s largest supplier of photolithography systems, provided the crucial top-financing through GO2.

“ASML is committed to operating sustainably and takes responsibility for the economic, social and environmental impact of its business decisions. GO2 provides a great opportunity for companies such as ASML to create new renewable energy production for the grid,” the company states.

When a business purchases GO2, they match the energy they consume with documented energy production from a renewable source with a direct contribution to the ECOHZ Renewable Energy Foundation. The foundation identifies and lends money to renewable energy projects that are ready to be constructed but lack the final and crucial capital needed to initiate construction.

When a company purchases GO2 for a partial or full years’ worth of electricity consumption, the company’s purchase will set into motion multiple investments in new renewable energy production.

“After the ECOHZ Foundation loan has been repaid from the income of the renewable power plant that was financed, the ECOHZ Foundation will once again lend the money ASML contributed to other renewable energy projects in need of financing. Based on the current financing models we are using, ASML’s single decision will result in the building of other renewable energy power plants in the future. We extrapolate that this system will by 2030 generate around 67 GWh,” says Tom Lindberg, Managing Director of ECOHZ. “Sandvik is an example of how companies can easily contribute to renewable energy production and participate in the global energy transition.”

“Working with ECOHZ was a positive experience,” Egil Kambo adds.  “When we asked questions, we got the answers we needed. ECOHZ was the partner we needed to realise the project. Without them and our positive working relationship we would not have had the financial capabilities to complete the project, or a reason to work through the hurdles we encountered.”

Kambo also explained that ASML played an “engaged and interested role” throughout, participating in all parts of project execution, including site visits before the project was initiated.

A few challenges were encountered along the way during the small hydropower project development. For example, one of the land owners wanted to take advantage of the forest resources on their property which resulted in delayed project execution. However, the project benefited from being able to use the roads that the land owner built during lumber operations.

Power plant construction was also customised to ensure obstruction-free passage for river eels which are listed as an endangered species. In 1976 an eel was spotted using the Sandvik River as its spawning ground. Although the species is no longer thought to be present in the river today, Kambo Energi wanted to be absolutely sure that project construction would not prevent the eel from being able to pass freely up the river in the future.

There was also a considerable amount of local and national bureaucracy to navigate through. “If we were to repeat the process,” Kambo said, “we would make sure that we had clearly indicated to all parties’ potential delays for project initiation.”

Mild winters and heavy rainfall throughout the year mean that the Sandvik River is often flowing at its maximum rate. The newly revamped hydropower plant is expected to generate approximately 3.2GWh annually. It is also anticipated that a positive effect will ripple throughout the local community and industry. Holiday homes nearby will once again be receiving electricity and the new 3km grid connection will secure electricity for farms in the neighbouring area. This is expected to stimulate job creation and make it more appealing to build houses, bring new life to the community and attract year-round residents.

This is the seventh hydro power project that KAMBO Energi has constructed, and Egil Kambo believes the entire small-scale hydro power industry will trend towards the construction techniques they have used for Sandvik power plant.

“We have gradually developed more cost-effective construction and implementation techniques,” he said.” Specifically, we did everything we could to simplify construction, while still building a robust and high-performance power plant. We have refined the turbine design to reduce the size of the total structure and used a module-based approach. When you can ship modules of a power plant in one piece, for example the intake-house, you reduce both the risk of something going wrong during construction and the time it takes to complete. The cost savings and risk reduction this achieves may lower the threshold for undertaking a hydro power project.”

So what advice does KAMBO Energi have for other companies that want to build and operate hydro power plants? “Get in touch with competent people who can help you design and construct your project,” Kambo urges. “There are many of them out there, considering how long we have been working with hydro power in Norway. Then get in touch with actors like ECOHZ that can help with the final financing.”

Norway is almost exclusively powered by renewable energy but increasing demand and discontinuation of Swedish nuclear power means that 60TWh of new production will be required in the Nordics by 2040. With more than 400 small hydro power plant sites ready to be built but lacking financing in Norway, can these potentially be used to fulfil demand?

Knut Olav Tveit, the managing director of the Norwegian Small Scale Power Producer’s Association, was asked for his views on the subject.

The Norwegian Water Resources and Energy Directorate (NVE) is predicting a significant increase in power consumption in Norway over the next few years. Will realising small scale power plants be able to make a significant contribution to meeting this demand?

As of now, the combined number of small scale power plants that have concessions but lack the financing to be built represents 3.3TWh of production. If they are built they will make a significant contribution to meeting the growth in demand.

Why are there so many power plants that have been granted concessions, but not been built?

There are about 400 of these smaller power plants sites that are ready to be built. The larger, institutional investors are interested in the biggest projects, but the smallest of these 400 need to be financed by private landowners. Banks require 25 to 30% of the total investment to be present as safety capital. Most private landowners do not have this, and it would require them to take a loan out on their homes. This feels too risky for most.

How do we know that all of these projects have enough waterflow to be successful?

NVE’s concession process compares a production potential of each site to its potential environmental impacts. They make sure that the proposed small scale production site has enough waterflow to operate efficiently, that it will not interfere with habitats that contain endangered species and that the local community will benefit appropriately from the investment.

They also consider the entire catchment area before granting concessions, they will not grant multiple concessions in one of the areas if any of the previously mentioned factors interfere with one another. In short, NVE guarantees that a power plant’s environmental ramifications are outweighed by the total societal benefit of constructing it.

Are you seeing any other trends in the market?

The Norwegian market is probably the one that has come the furthest in the development and implementation of hydropower technology. The technology makes the sector extremely efficient, and recent developments continue to improve the situation even further. I would go so far as to say that small scale hydropower in Norway is the most efficient in the world.

We are also seeing that since NVE is so thorough in their evaluations of potential sites before they grant concessions, positive externalities are consistently generated on a local level by giving landowners a sustainable income. And this is on a long-term basis, since landowners will only initiate projects they have carefully considered, as they are staking their financial livelihoods on the project. When these factors are combined with the longevity of small scale power technology, we know that for each new small scale hydropower built, 50 – 70 years of renewable production is set into motion – this duration is highly competitive when compared to wind.

We are also seeing that there is indeed a financing vacuum present for all of the sites that have full concessions, but lack financing. Luckily, external financing options are becoming available, and are aimed at helping the corporations and organisations that want to make a real impact and initiate construction of these sustainable projects.