By Kondapuram Sampangi Archana Rani  28 May 2019 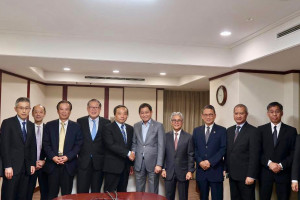 Image: Officials from SKK Migas among others. Photo: courtesy of SKK Migas.

Indonesia’s oil and gas regulator SKK Migas and Japanese energy explorer Inpex have agreed on a framework for the revised $20bn plan of development (PoD) of the Masela Block in the Arafura Sea.

The country’s Energy and Mineral Resources Minister Ignasius Jonan was quoted by The Jakarta Post as saying: “Inpex and SKK Migas have agreed on the substantial matters of the Masela Block’s development this afternoon in Tokyo. The discussion has been taking place for 18 years.”

A final deal is expected to be signed by the government with Inpex during G20 meetings scheduled to be held in Japan in late June 2019, reported Reuters.

Indonesia to  get at least 50% production share from Masela Block

The Indonesian government is expected to get at least 50% share in the production from the long-delayed Masela Block.

The firm said in statement: “INPEX will formulate a detailed revised plan of development (POD) contingent on the results of the Pre-FEED work and ongoing discussions with the Indonesian authorities to achieve a cost efficient and economically competitive project.”

A series of evaluations including front-end engineering and design (FEED) work was planned to be carried out by the company, upon securing government approval of the revised POD.

The authorities, however, mandated the company to re-propose the POD for the Abadi LNG Project based on an onshore LNG development scheme in April 2016.

As a result of constructive discussions with the authorities, Inpex agreed in March 2018 to commence Pre-FEED work based on an onshore LNG development scheme with an annual LNG production capacity of 9.5 million tons.