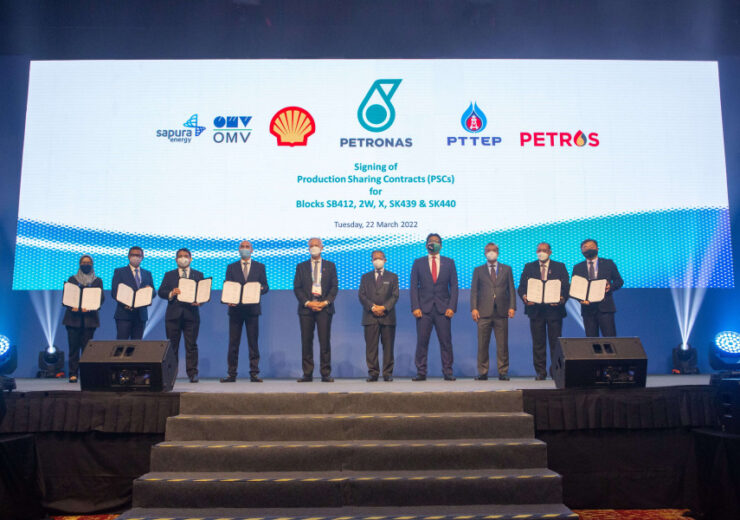 Shell, through its subsidiaries, has signed three production sharing contracts (PSCs) with Petronas for four offshore oil and gas exploration blocks in the Malaysian states of Sabah and Sarawak.

For Shell, the PSCs were signed by its subsidiaries Sabah Shell Petroleum Company (SSPC), Shell Sabah Selatan (SSS), and Sarawak Shell Bhd (SSB). SSPC and SSB will be operating the exploration initiatives.

Shell conventional oil and gas upstream executive vice president Peter Costello said: “The signing of these PSCs marks another growth milestone for Shell in Malaysia. Our long and successful partnership with Petronas in Malaysia continues, as together we seek to provide the energy of today while funding the energy of tomorrow.”

Apart from the four blocks, Petronas signed a PSC for another concession called SB412 with PTTEP HK Offshore and SapuraOMV Upstream (M). SB412 is located off the coast of Sabah.

The signing ceremony for the four PSCs was held at the Kuala Lumpur Convention Centre. The offshore exploration blocks were awarded in the Malaysia Bid Round (MBR) 2021.

“The reduction in global exploration drilling over the past two years has pressured the industry to resolve current supply shortages. As global economies have started to recover post-pandemic, the industry needs to ensure exploration activities continue to sustain production.”

Meanwhile, Shell announced that SSPC, which is the operator of the Gumusut-Kakap semi-submersible floating production system (GK-Semi FPS) located offshore Sabah, has started work on the Gumusut-Kakap phase 3 development.

The final investment decision (FID) for Gumusut-Kakap phase 3 was taken in August 2020. The phase 3 development calls for the drilling of four wells, which will have a tie back to the GK-Semi FPS.

Gumusut-Kakap phase 3 will see the drilling of two producer wells and two water injection wells. First oil from the project is anticipated to be drawn this year.