Sharp Energy Solutions (SESJ), a subsidiary of Sharp, has secured a contract to build two solar plants with a total capacity of 98MW in Vietnam. 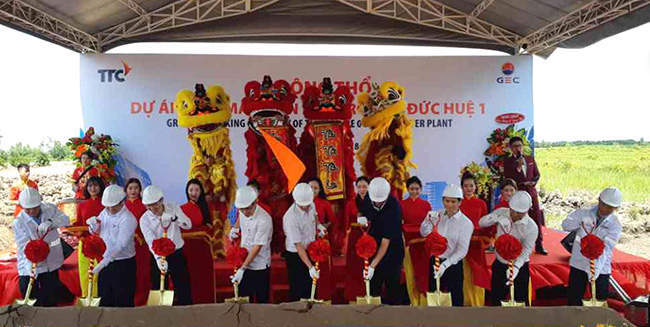 Image: Groundbreaking at the construction site in Long An Province. Photo: Courtesy of Sharp Corporation.

The two solar plants will each have a capacity of 49MW and will be located in Binh Thuan Province and Long An Province in the country, Sharp stated.

The order was placed by Gia Lai Hydropower Joint Stock Company and TTC-Duc Hue Long An Power operating under the umbrella of the Thanh Thanh Cong Group (TTC Group).

The two solar plants are expected to generate nearly 149,740MWh of clean energy per year, which is equivalent of the power consumed by 79,000 average Vietnamese households per year.

The power generated from the solar plants can also help in offsetting nearly 49,863 tons of CO2 from entering the atmosphere every year.

The government of Vietnam has ambitious plans to increase the electricity generating capacity from solar power facilities to 850MW by 2020 and to 12GW by 2030.

Last June, the government launched a feed-in tariff (FIT) system to further encourage the wider use of renewable energy. Electricity generated at the two solar plants in Binh Thuan Province and Long An Province will qualify under this system.

In February this year, Sharp secured an order from Gia Lai Electricity to construct a 48MW solar plant in Vietnam.

This project is located in the Thua Thien Hue Province in the North Central Coast region of the country. It will generate about 61,570MWh per year, which is equivalent of power consumed by 32,600 average households in the country.

Recently, Sharp has completed a contract to construct a 16.5MW solar plant in Mongolia. This plant is located in the Zamyn Uud, Dornogovi Province of the country.

The project is a collaboration between Shigemitsu Shoji and Mongolian energy company Solar Tech. This plant is expected to generate about 31,162MWh per year and it is expected to offset nearly 24,800 tons of CO2 per year.

It is expected to contribute to Mongolia’s government aim to generate 25% of its power generation capacity from renewable sources.