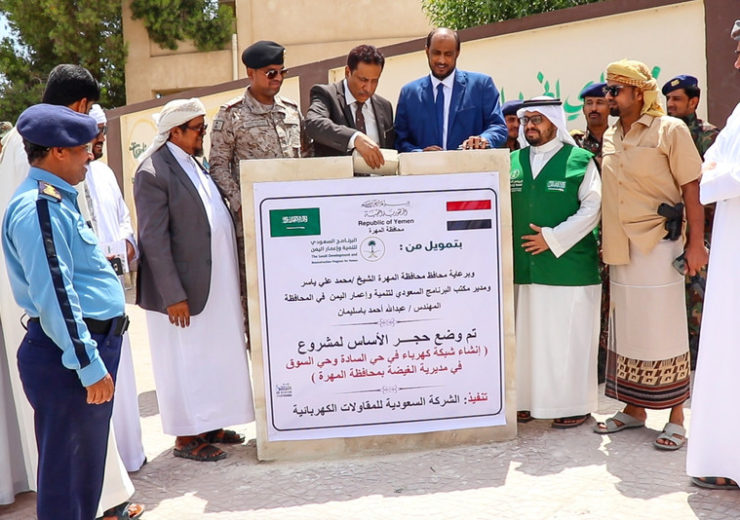 The Saudi Development and Reconstruction Program for Yemen (SDRPY) has inaugurated a project to rehabilitate electricity networks, raise efficiency, enhance capacity and address high electrical loads and power outages in Al-Mahra Governorate. The project will serve 10,000 beneficiaries in the Al-Sadah and Al-Souq areas of Al-Ghaydah Directorate.

“We and our brothers and sisters in the Kingdom of Saudi Arabia have one body and one homeland,” Governor Yasser said, “and we are looking forward to more projects and more achievements.”

The governor expressed great pleasure at the launch, stressing SDRPY’s work on a number of projects furthering positive transformation of services in the province. He voiced thanks to the Custodian of the Two Holy Mosques, King Salman bin Abdulaziz Al Saud, and his Crown Prince, Mohammed bin Salman, for their interest in the Yemeni people, and also SDRPY’s supervisor and personnel for all their efforts across Yemen. He cited in particular the King Salman Medical and Educational City project in Al-Mahra.

The electricity project aims to rehabilitate electrical grids, address and resolve the bottlenecks in medium- and low-voltage networks in residential and commercial districts, ease the flow of power through the electricity grid, reduce interruptions, strengthen resilience to weather conditions, and enable absorption of new loads.

The project serves three schools – Al-Aidarous School, Aisha School, and Al-Shaab School – as well as Al-Ghaydah marketplaces and all facilities in these areas. It involves establishing new medium-voltage and low-voltage networks to high specifications, including lines, extensions and transformers for the district’s commercial zone and Al-Sadah neighborhood. The project consists of a medium-voltage network of 11 kilovolt (kV) medium lines and a network of low-voltage (415 volt) air lines, in addition to the distribution 11.4 kV transformers.

Along with numerous projects aimed at improving the internal electricity grid lines in Al-Ghaydah city and other parts of Al-Mahra Governorate, this SDRPY project arrives against a backdrop of high temperatures, weak infrastructure for electricity facilities, and increased electricity consumption in summer. The project is increasing the production capacity of the current Al-Ghaydah power plant by 75%, adding 10 megawatts and 5 transformers of 3 mW each to reduce frequent interruptions and help accommodate high demand for electricity in the two areas.

Highly attentive to electricity in Al-Mahra and the other Yemeni governorates, SDRPY supplies Yemeni power plants with oil derivatives. The program intends to increase the monthly support provided to Al-Mahra Governorate in the form of fuel allocated to the province’s electricity stations during summer to about 4,800 tons, accommodating higher loads and reducing outages in light of increasing demand and power deficits.