Saudi Aramco shares have begun trading on the Tadawul stock exchange following an IPO that raised a record $25.6bn for the oil-rich kingdom 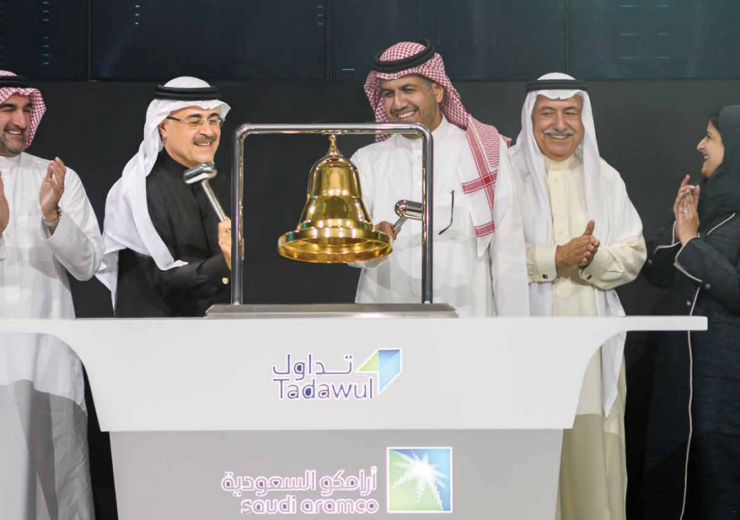 Shares in Saudi Aramco have soared since its stock market debut, briefly giving the firm the $2tn market valuation that has been long-sought by Crown Prince Mohammed bin Salman.

A 1.5% portion of the state-owned oil giant began trading on the Saudi Tadawul stock exchange yesterday (11 December) – marking the culmination of an IPO process that has been long in the making.

Today, shares again surged at the opening of trading, briefly taking Aramco’s value past the $2tn level that had initially been eyed by the Saudi leader – although the early gains settled back down later in the day – resting at around the 37 riyals mark ($9.87), according to the Reuters news agency.

Last week, Aramco concluded its share pricing ahead of the public float, settling at 32 riyals ($8.53) per share – which gave it a $1.7tn valuation, and raising a record $25.6bn in the process.

Its debut on the Tadawul stock exchange confirms its status as the world’s most valuable listed company – well ahead of tech giant Apple at $1.2tn.

Its IPO is the highest on record, edging out Chinese e-commerce giant Alibaba, which raised $25bn on the New York Stock Exchange in 2014.

Marking the start of trading, Saudia Aramco CEO Amin Nasser said the completion of the IPO and the launch on the Tadawul stock exchange signalled a “new chapter” in the firm’s history.

He said: “We believe the demand from a broad base of individual investors and such a wide range of institutions reflects trust in our long-term strategy and our vision to become the world’s preeminent integrated energy and chemicals company, operating in a safe, sustainable and reliable manner.

“Building on our low-cost production and our reliable supply of low-carbon intensity crude oil to our customers, we will remain focused on providing our shareholders with resilient value creation through crude oil price cycles.”

Revenue generated by the flotation has been earmarked for financing bin Salman’s Saudi Vision 2030 project of economic reforms, designed to reduce the kingdom’s dependency on sovereign wealth derived from its copious crude oil assets, and to promote a more diverse private market infrastructure.

As the jewel in the crown of the Saudi economy, Aramco has a significant role to play in this modernisation venture.