Persta Resources and Jixing Energy (Canada) have entered into a gas handling agreement that involves the Voyager gas gathering system and pipeline. 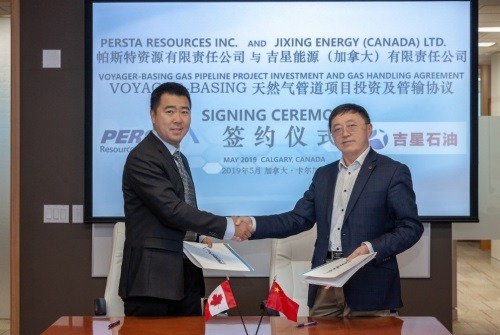 The Gas Handing Agreement will lead to the delivery of natural gas and associated products produced to the Alberta Natural Gas Pipeline System.

Mr. Le BO, Chairman and Executive Director of Persta Resources said, “After nearly three years of pipeline route selection work, surveying, environmental assessment and public consultations by Persta as part of efforts to achieve regulatory compliance, including a review by Alberta Energy Regulator (AER), the Company has obtained the license for 37 kilometers of pipeline that will connect Persta with the Voyager area, which is where its production facility is located, namely in Basing. We are honored to work with Jixing Energy (Canada) Ltd. on implementing the 37 km pipeline project and associated surface production facilities, including multi-well batteries and dehydration/ compressor stations. The estimated overall investment will exceed C$40 million. As of today, approximately 30% of detailed engineering and design work for the pipeline project has been completed, and the purchase order for line pipes has been placed. Site construction is planned to commence by mid-June 2019, and the pipeline project and associated projects are expected to be completed and operational before the end of 2019.”

The pipeline will provide Persta’s core production area, located in Voyager, with access to NGTL and subsequently the northern markets, which are important for the Company’s future growth. Upon completion of the project, not only will the four exploration wells drilled in Voyager between 2017 and 2018 be put into commercial production, but Persta will also have more than 2 billion cubic meters per year (200mmscfd) of regional pipeline transport capacity for large-scale development of the Voyager area. This will lay a solid foundation for the Company’s rapid production increase and enhance its cash flow from this area.