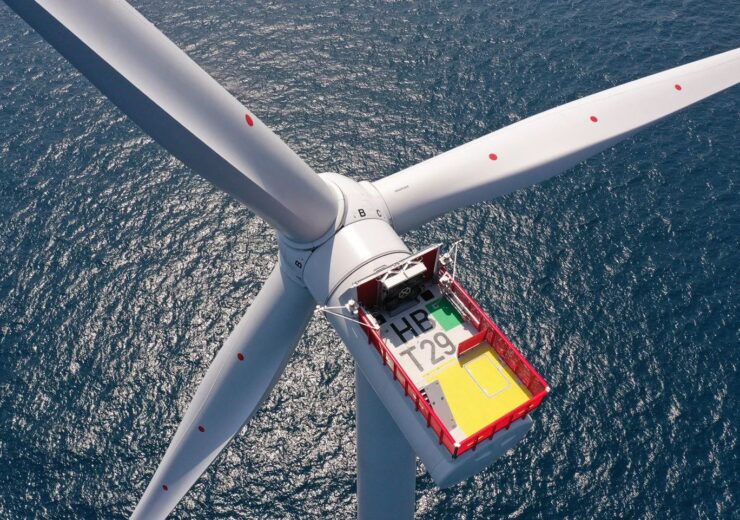 According to Ørsted, the installation of the project’s offshore substation (OSS) and reactive compensation station (RCS) were completed in late October 2021.

Following that, the Danish firm and its partners have been working to commission and energise the Hornsea 2 offshore wind farm ahead of its expected operational date in 2022.

The power generated by the project’s 165 wind turbines, each with 8MW capacity, will be transferred through 373km of array cables to the offshore substation and the reactive compensation station.

From there, the power will be transmitted the national grid through 390km of offshore and 40km of onshore export cables which end at the onshore substation in Killingholme.

Hornsea 2 programme director Patrick Harnett said: “Achieving first power is an important milestone for the project and a proud moment for the whole team. Constructing a project of this size and scale is only possible through strong collaboration, hard work, and dedication.

“From here, we have the finishing line in sight as we install the remaining turbines and continue testing, commissioning, and energising our wind farm into the new year.”

Located nearly 89km off the coast of Yorkshire, the Hornsea 2 offshore wind farm will be able to power up more than 1.3 million homes. Besides, it will help in offsetting approximately 1.9 million tonnes of CO2 and 46,000 tonnes of SO2 emissions annually.

The 1.2GW Hornsea 1 offshore wind farm has been in operations since June 2019. Together, the two Hornsea projects will be capable of meeting the power consumption needs of more than 2.3 million homes.

Ørsted is planning two more projects in the Hornsea Zone, which include the 2.4GW Hornsea 3 and Hornsea 4 offshore wind farms. Hornsea 3 had secured a development consent order in December 2020, while Hornsea 4 is undergoing the planning process.

Ørsted region UK head Duncan Clark said: “Climate change is one of the biggest threats facing the world today, and we believe that the solution lies in deploying renewable energy resources on a much larger scale than anything we have seen so far.

“The UK is the global leader in offshore wind, and our Hornsea projects have helped pave the way for the next generation of offshore wind farms.”