German wind turbine-maker Nordex has been selected by Swedish energy company Vattenfall to supply 3.6MW turbines for the expansion of its Wieringermeer wind farm in the Netherlands. 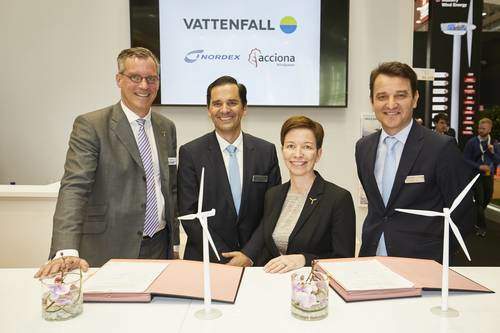 For this order, Nordex will be supplying 32 of its N117/3600 turbines. This order is an expansion of the last year’s order from Vattenfall for supply of 50 turbines from the same series. Construction of the wind farm is presently being prepared.

The expansion contract includes the delivery and installation of the turbines along with the services for at least two years, the German company stated. This expansion will increase the total capacity of the wind farm to nearly 300MW.

Vattenfall senior vice president and business area wind head Gunnar Groebler said: “We are pleased to further expand the partnership with Nordex. The contract shows once again that the development of wind power takes on a European dimension – equally for the benefit of the North Holland region, where the project is realized, as well as for the region of Hamburg and Northern Germany, where value creation and thus jobs are secured.”

The Wieringermeer wind farm is located in the province North Holland, in the polder Wieringermeer, about 60km north of Amsterdam. This site is claimed to have a good wind conditions and is also subject to strict sound emission restrictions. Nordex stated that its turbines have met this criterion.

Installation of the 32 turbines will take place after the first construction phase of the wind farm is completed. Commissioning of the first 50 turbines is planned to place next year. All the turbines are expected to generate nearly 1.3 terawatt hours of clean electricity per year.

Nordex chief sales officer Patxi Landa said: “All in all, we are now installing almost 300 megawatts for Vattenfall. The new contract is a very important sign that highlights the mutual confidence which has grown between the Vattenfall and Nordex teams over the last few months.”

Last year Vattenfall signed an agreement with Microsoft to supply electricity from the Wieringermeer wind farm to its data center in Middenmeer north of Amsterdam for a term of ten years.

Earlier this month, the turbine-maker secured an order from Energiekontor to supply turbines for 300MW capacity in Germany.