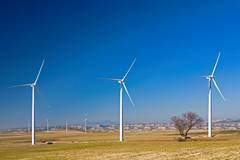 The financial aspects of the order were not disclosed by Nordex which will supply a total of 30 of its AW132/3300 turbines for the wind farm. The contract also features a multi-year service for the Energetica wind farm to be built near Bahia Blanca.

The location of the wind farm experiences wind speeds averaging more than 10m/sec.

According to Nordex, the AW132/3000 turbine range to be installed at the Argentine wind farm is one of the largest swept areas in the 3MW segment and has been designed to optimize energy output and bring down cost of energy significantly in low wind sites.

The German wind turbine manufacturer plans to assemble the turbines for the Energetica wind farm locally in Argentina. The manufacturing of the 120m high concrete towers will also be done locally, said Nordex.

Earlier this year, the German company won an order from Gas Natural Fenosa Renovables (GNFR) in Spain to deliver 58 AW132/3300 wind turbines to be used for six wind farms.

Last month, Nordex reported that it had completed installation of its largest wind turbine till date in the form of the N149/4.0-4.5 turbine at the Wennerstorf II wind farm located about 30km south of Hamburg in Germany.

A month prior to that, the wind turbine manufacturer bagged an order to supply 191 turbines from Enel Green Power for the 595MW Lagoa dos Vento wind farm in Brazil. As part of the contract, Nordex will supply its AW125 turbines with an installed capacity of 3.15 or 3.0 MW, which will be mounted on top of 120m concrete towers.