The US Army Corps of Engineers (USACE) is entering phase one of a two-phase project that will raise Dahla Dam in Afghanistan by 25ft (7.6m), boosting reservoir capacity and increasing water for irrigation and consumption. 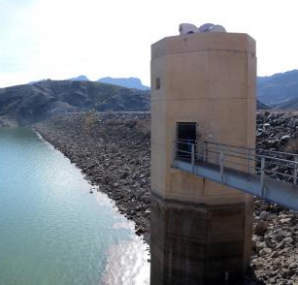 The US Army Corps of Engineers (USACE) is entering phase 1 of a two-phase project that will raise Dahla Dam in Afghanistan by 25ft (7.6m), boosting reservoir capacity and increasing water for irrigation and consumption.

Originally completed in 1952, three decades of war and neglect have left the dam, and its network of irrigating canals across Kandahar province, silted and in ruins. The area was surrounded by mines, which have been cleared by USACE to allow phase one work to be carried out.
The project will include extending the outlet tunnel and building a new valve house, which currently don’t operate correctly and will eventually be submerged when the reservoir’s footprint is raised.

Sediment has reduced the reservoir’s capacity by one-third to one-half, according to estimates. Towards the end of most summers, the reservoir is depleted, leaving little for people or farmers downstream. According to Helmand and Arghandab Valley Authority (HAVA) officials, the water supply doesn’t even reach 30% of irrigation canals refurbished by the Canadian International Development Agency over the past several years.

"The Canadians rehabilitated many of the irrigation canals south of Dahla Dam as part of their Arghandab Irrigation Rehabilitation Project," said USACE Kandahar Resident Office officer in charge Maj. Jeffery Ward. "Projects like those by the Canadians, those of other countries and the U.S. all interconnect. Once we complete phase two, these projects will all come together and greatly increase irrigation and drinking water in Southern Afghanistan."

The effect should be widespread. Arghandab canal, southern Arghandab canal, Baba Wali canal and the south and north Tarnak canals carry water from the Dahla Dam reservoir. The Arghandab River divides into 55 streams and the canals divide into an additional 55 streams, irrigating lands across Afghanistan’s agricultural heartland.

HAVA officials say the dam now irrigates nearly 98,000 acres of land, but when completed, those numbers should increase to 150,000 acres. Raising the dam will also help supply Afghanistan’s second largest city, Kandahar, which has a population of about 500,000 people.